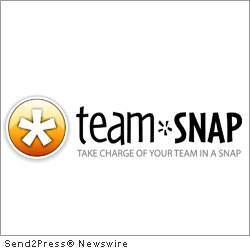 BOULDER, Colo., March 7, 2012 (SEND2PRESS NEWSWIRE) — TeamSnap, a leading web service for managing sports teams and leagues, today announced it had expanded its staff in response to strong customer growth. “We are adding customers at over twice the rate we were at this time in 2011. We seem to be hitting a real sweet spot and we needed to build our own team to support and extend this growth,” said David DuPont, CEO of TeamSnap.

TeamSnap announced that the recent hires were in customer acquisition and software development. To lead the customer growth efforts, TeamSnap hired Ken McDonald as VP of Customer Acquisition to work in the Boulder, Colorado office. Ken was previously VP of Marketing and Customer Success at LifePics, an online photo service in Boulder with nearly 10 million customers.

TeamSnap added to its development team by bringing on board Mark Cornick in Maryland and Emily Dobervich in Oregon. Mark brings both a strong systems administration and software engineering background from his days at NASA’s Goddard Space Flight Center, Towson University and Viget Labs. Emily has a broad development background and a strong record of contributions to several open source projects.

TeamSnap is headquartered in Boulder, Colorado and has employees in six states.

About TeamSnap, Inc.:
TeamSnap is an award-winning web service for managing recreational and competitive sports teams and groups. With a simple but powerful online interface, TeamSnap makes it easy to keep track of Rosters, Schedules, Game and Practice Attendance and Availability, Team Payments, Statistics and much more. Comprehensive messaging functions keep everyone in touch, and with a strong focus on usability and simplicity, TeamSnap is software that people actually find fun to use.

With enthusiastic customers in 135 countries, and teams representing over 100 different sports and (non-sport groups), TeamSnap has quickly become one of the fastest-growing team and group management solutions on the planet. And we’re just getting started!

News Source: TeamSnap, Inc. :: This press release was issued on behalf of the news source by Send2Press® Newswire, a service of Neotrope®. View all current news at: http://Send2PressNewswire.com .