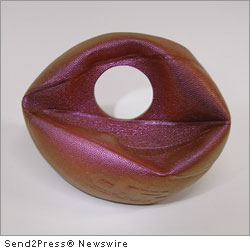 “Slammed and Dunked,” a life-size sculpture of the basketball salvaged from the celebrity’s residential trash, was partially inspired by Kardashian’s recently failed marriage to NBA player Kris Humphries and the questioned authenticity of their acclaimed nuptials.

“Many people in this country are still very concerned with marital rights – after Kim Kardashian’s mockery of marriage, why should anyone take anything she does seriously, anymore?” asks artist XVALA.

The sculpture was created out of a ‘recycled resin’ formulated from remaining leftover garbage that was also collected from the Kardashians’ trash bin. Also, a part of the collection is candid mobile phone self-portraits of the reality star that she took for Twitter and Instagram, which are backed with aluminum, also partially recycled from her personal garbage.

“By deleting everything that reveals who she really is, Kim Kardashian actually reveals her true self,” said XVALA, “You can always learn something about someone by looking at their garbage, and Kim produces a lot of garbage.”

“I agree with Jon Hamm. Kim Kardashian should refrain from making any more reality shows,” said Cory Allen. “People aren’t too entertained by divorce and failed relationships in these economically trying times.”

Dumpster diving is nothing new to the artist or the mainstream media. Late last year, XVALA invaded the residential dumpsters of Facebook’s Mark Zuckerberg and Apple’s Steve Jobs, who passed away a day after the release of his personal trash. XVALA was also responsible for reconstructing celebrity Scarlett Johansson’s nude photos for his “Fear Google” campaign, posting the two hacked images all through the streets in and around the Los Angeles area as street art.