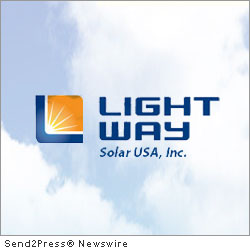 ISELIN, N.J., March 19, 2012 (SEND2PRESS NEWSWIRE) — Lightway Solar America, Inc. (“Lightway”), the U.S. subsidiary of Lightway Green New Energy Co., Ltd., announced the execution of a Supply Agreement with G&S Solar (“G&S”) to provide thirty-four megawatts (34 MW) of multicrystalline solar modules. The Agreement requires G&S to purchase over 122,000 panels from Lightway within a one year period. Deliveries had already commenced in December of 2011 as part of an eight megawatt (8 MW) contract that has now been expanded to a total of thirty-four megawatts (34 MW).

Lightway opened their U.S. office in Iselin, New Jersey during the end of 2010 and has captured significant market share through the implementation of aggressive strategies that include the development of a bankable product, technological innovation, and a variety of financial solutions for their downstream customers. During Q4 2011, Lightway executed over 100 MW of Supply Agreements to be delivered throughout the U.S. market during the period of 2012.

Wei Qiang, CEO of Lightway Green New Energy, said, “The future success of Lightway will depend on our ability to develop long term relationships with project developers that have the capability to excel in a market that is dominated by third party financing. We are confident that G&S Solar has an investment strategy that allows them to remain financially aggressive and we are pleased to begin this new partnership that will solidify our eastern seaboard footprint.”

Gregg Wasser, Owner of G&S Solar, said, “In today’s economic environment, it was essential for G&S Solar to find a module supplier that not only met our criteria of bankability, quality and financial strength, but was also willing to become a true long term financing partner. We feel that our partnership with Lightway is a critical component of our growth strategy as we evolve into a new era of the solar industry.”

About Lightway Green New Energy Co., Ltd.:
Lightway Green New Energy is world class, vertically integrated solar panel manufacturer with 400 MW of balanced, production capacity that incorporates ingot, wafer, cell and module manufacturing. The manufacturing plant is located in a futuristic Science & Technology Park based in Gaobeidian, China that spans 2.3M square feet and is the home to over 5,000 employees. With a strong financial portfolio and the support of their strategic partnerships, Lightway will continue to expand and plans to reach 600 MW in 2013 and 1500 MW in 2014. One of the strategic markets for Lightway is the development of the U.S. region through their subsidiary, Lightway Solar America, Inc. which has a sales office in New Jersey and warehouses on both the east and west coast. For more information, go to http://www.lightwaysolarusa.com .

About G&S Solar:
G&S Solar is a PV developer and has constructed over 30MW of project since inception. G&S Solar is an affiliate of G&S Investors, which develops, leases and manages income-producing properties in the tri-state area. Founded in 1982, G&S is known in the industry for its creativity in solving development problems, particularly in sites deemed unworkable due to physical, economic and political complexities and for achieving the highest possible return on its investment. The company’s success is based upon identifying opportunities and applying solid economic forecasting, with sensitivity to political realities and retail trends. G&S has successfully executed every project it has initiated. This record has been achieved by fostering close and flexible relationships with financial institutions, local government and community groups involved in every project. For more information, please go to http://www.gssolarinstallers.com .

News Source: Lightway Solar America, Inc. :: This press release was issued on behalf of the news source by Send2Press® Newswire, a service of Neotrope®. View all current news at: http://Send2PressNewswire.com .