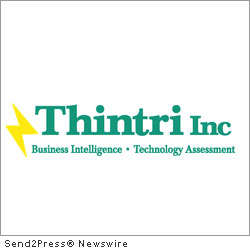 NEW YORK, N.Y., March 19, 2012 (SEND2PRESS NEWSWIRE) — Platinum group metals (PGMs), namely, platinum, palladium, rhodium, iridium, ruthenium and osmium, are heading toward a period of exceptional volatility with supply constraints and dramatic fluctuations in price, according to a new report published by Thintri, Inc. (www.thintri.com). The same materials are threatened in the longer term by competing materials in some of their largest markets.

PGMs are universally present in the catalytic converters in motor vehicles, in disc drives, oil refineries, glass manufacturing, medical devices and implants such as pacemakers and dental crowns, and a host of other applications. Some are also highly valued in jewelry and investment. PGMs are also rare, and quite costly.

Like most natural resources, PGM supplies are inherently limited, but to a greater degree than other important minerals. PGMs are produced in just a few countries; the U.S. imports 95 percent of the PGMs it consumes.

The limits of those supplies are now becoming clear. Already, Russia, the largest palladium producer, has announced that its palladium supplies are dwindling.

Industry analyses indicate that known PGM reserves are sufficient for another 360 years at present rates of production and consumption. However, that figure drops to 15 years if rising demand, particularly from growing industrialization and automobile sales in emerging economies, is taken into account.

Growing demand is fueled by a range of factors including accelerating motor vehicle sales around the world, a rising industrial sector in many regions and a growing consumer preference for white metals in jewelry. As demand exceeds available supplies, prices will rise significantly.

On the other hand there are technologies already on the market, and some near commercialization, that will alter the picture just as dramatically in the other direction, by replacing PGMs at much lower cost, and by relieving supply and price pressure through improved recovery.

While some PGM applications, such as jewelry, investment and electronics, are relatively immune from substitution at this time, most PGM applications are vulnerable to replacement by nanotechnology-based solutions available at a fraction of the cost. Such alternatives can partly or completely replace the PGM content in critical applications like catalysts in the automotive, energy and industrial markets.

Other new methods will eventually, in effect, bring new supplies to market through improved recovery. New techniques for recycling catalytic converters and similar products are able to recover far more PGM content than was possible earlier. In addition, once-inaccessible PGM content in copper and nickel mine waste and slag can now be exploited. The availability of literally mountains of mine waste and slag throughout western North America and other parts of the world, will soon set off a “gold rush” to exploit those resources.

Today, platinum group metals are at an extraordinary intersection of market forces. The confluence of growing demand, limited and/or dwindling supplies, and growing availability of alternatives and new supplies, will likely create a period of extraordinary volatility before things stabilize.

Much of this decade will witness a transition of PGM markets to adjust to a new reality of price volatility and tightened supplies, while others move to take advantage of the new opportunities presented in PGM recovery and replacement.

About Thintri, Inc.:
Founded in 1996, Thintri, Inc. (www.thintri.com), is a full-service consulting firm, based in New York and directed by J. Scott Moore, Ph.D.

News Source: Thintri, Inc. :: This press release was issued on behalf of the news source by Send2Press® Newswire, a service of Neotrope®. View all current news at: http://Send2PressNewswire.com .