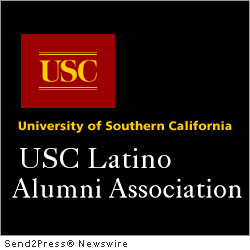 She said to Dr. Zapanta and his wife, Rebecca, “Finally, I have to say thank you – 14 million ‘thank yous’ – to the USC Latino Alumni Association for what you’re doing. I’m absolutely blown away to learn that this organization has raised $14 million to help Latino youth pursue their education. It’s caring folks like you who made my story possible.”

USC Trustee Frank Cruz presented Zapanta with the Legacy Award. Zapanta recalled the first scholarship dinner held at Town and Gown in 1974. “We raised $16,000 that evening and with the university matching us two-to-one, our total was $48,000,” he said. “Dr. Hubbard always said how proud he was of that decision to match our fundraising and since his passing, his legacy lives in with the annual recognition of one of our outstanding scholars.”

Dr. Zapanta earned his B.A. in psychology from USC in 1954 and completed his M.D. at the Keck School of Medicine of USC in 1973. He completed his post graduate training at Los Angeles County-USC Medical Center. He has been in private practice since 1979 and is the senior partner at Eastside Orthopedic Medical Associates and Plaza Surgical Center.

Dr. Zapanta with his wife, Rebecca annually give a scholarship to a deserving Garfield High School student and sponsor a student from the Keck School of Medicine at USC of USC MedCor Summer Work Program.

His brother, the late Dr. Edward Zapanta was the first Latino appointed to the USC Board of Trustees in 1984.

“My proudest achievement is the founding of the USC Mexican American Alumni Association that now continues as the USC Latino Alumni Association,” Zapanta said. “I’m honored to have played a small role in the support and nurturing of our Latino students.”

Jovana Lara of ABC7 Eyewitness News was the mistress of ceremonies and Father Lawrence Seyer, pastor of Our Savior Parish and USC Caruso Catholic Center said the invocation.

News Source: USC Latino Alumni Association :: This press release was issued on behalf of the news source by Send2Press® Newswire, a service of Neotrope®. View all current news at: http://Send2PressNewswire.com .