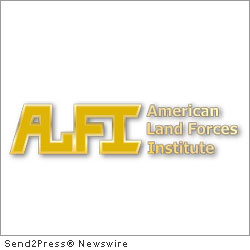 Colonel Pryor will head ALFI as its CEO. Also joining the ALFI team will be Major General Robert H. Scales (U.S. Army, Retired) who is serving as the Chair of ALFI’s Board of Directors.

“America’s Soldiers, Marines and Special Operations forces have carried the greatest burden in all of our contemporary wars. Since World War II, land forces have comprised only five percent of the entire Armed Forces, but have suffered more than eighty percent of military fatalities. Yet in spite of this horrific down payment in blood, this nation still fails to provide our ground forces with the support these brave men and women require to enable them to win our wars at the lowest possible cost in human life and human suffering. ALFI is dedicated to the proposition that America’s historic neglect of our land forces must not be allowed to persist,” Pryor said.

“As all who have gone before them, our service members are willing to give their today’s for our children’s tomorrows. We as Americans owe them the best of everything. ALFI is dedicated to advocating on behalf of these service men and women for the best possible training, preparation, equipment, supplies, support, and medical care during their tours of duty, and for the best possible support in their re-integration into civilian life. ALFI’s mission is to be the voice of America’s ground forces and veterans.”

ALFI will be an agent of change at all levels of America’s defense community. ALFI’s goal is to ensure that every member of America’s land forces – starting from their recruitment and continuing through to their transition to civilian life and beyond – will have the best that this country can provide them. ALFI’s programs and activities include a comprehensive advocacy effort that will affect military and national security policy at the highest levels of government; educating military and defense stakeholders as well as the general public; and facilitating the provision of the highest quality services for both land forces and veterans.

News Source: American Land Forces Institute :: This press release was issued on behalf of the news source by Send2Press® Newswire, a service of Neotrope®. View all current news at: http://Send2PressNewswire.com .