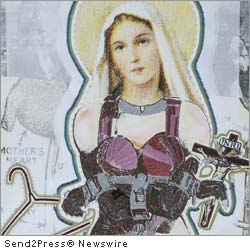 OKLAHOMA CITY, Okla., March 29, 2012 (SEND2PRESS NEWSWIRE) — Cory Allen Contemporary Art (CACA) announces that artist and feminist Marilyn Artus is introducing her new portrait of the Virgin Mary in attempt to protest the continued infringement of women’s rights by the Catholic Church and the many prominent conservatives. The portrait of the Virgin Mary will be on tour though many galleries and events; kicking off the tour with the AKA Gallery in Oklahoma City, Okla., April 6, 2012.

“The Lady of Nazareth Chose to Play Along,” depicts the Virgin Mary, with Pope John the XXIII looking on, partially nude in provocative black panty hose and heels, but denied free will by bondage restraints that have her arms crossed and pinned. Her hands, sticking out passed curved hips, embrace the traditional aged crucifix and a wire hanger that represents the many brutal back-alley abortions that have been the unfortunate result of denied contraceptive practice.

“My image shows solidarity for the Virgin Mary, not blasphemy. I feel that as a woman she has been the submissive victim of male dominated Catholic hierarchy,” said artist Marilyn Artus. “But, I’ve already been met with a certain amount of anger with requests to not show the image coming from some of my friends and relatives who belong to the Conservative Right.”

Prominently placed over her private area is a scarlet F, marking the Catholic Church’s questionable area of focus in regard to their stances on birth control and abortion.

Lifelong congregation member Jeff Hamilton of Saint John the Baptist in the Oklahoma City area is not against the protest art. “It seems kind of sacrilegious to depict the Virginal Mother that way, but the church uses art for its message and this happens to be a case where an artist uses art to create an image the church wouldn’t agree with,” said Hamilton, adding, “As an adoptee, there isn’t a day that goes by that I don’t feel grateful to be here, but I support the artist’s right to protest the Catholic stance on birth control.”

The artist’s camp is expecting more contentious voices to emerge against the work that is set for display throughout the month. “The artist isn’t trying to anger anyone. She is simply saying the Catholic ban against modern contraception was put into place by a Pope, and it can be lifted by a Pope,” said spokesman Cory Allen.

Marilyn Artus’s past work includes “Our Lady of the Anti-Personnel Weapon and Her Stepford Friends.” The work depicting clashing conservative ideologies featured the religious icon wielding a knife and a hand grenade and was covered by the mainstream media in 2010.

The Virgin Mary portrait will be on a tour from coast to coast in the United States before going international. It will first publicly appear next Friday, April 6th, at AKA Gallery Oklahoma City, Okla., before heading to other galleries and festivals.