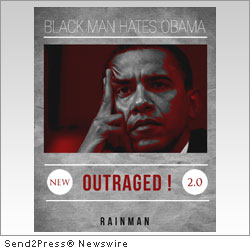 According to the “RAINMAN,” the book’s controversial author: “The Fantasy: Barack Hussein Obama. Hailed God Of All Things, Savior of The World, The One, The Cure to all of the ills of the world, The Equalizer of Economic Disparity, a Modern Day Robin Hood, God in the flesh, ‘Possessor of a tongue dipped in the unvarnished truth,’ Mr. Fix-It.”

However, says the author in his book, “The Reality: Barack Hussein Obama. Peter Principle. A failure, a weak leader; perhaps a traitor, a pathological liar, a race-baiter; some say a Muslim empathizer, a Black Nationalist, a divider, a Constitution breaker, a lover of terrorists, Esau’s Hamitic Zionist Puppet, King of Governmental Expropriations, killer of the true Israelites through his billion dollar donations to the International Planned Parenthood Eugenics Program, and facilitator of implacable legislations designed to entrench us in the mire of the madness of their agenda – Total World Domination. Who is Barack Obama, Really? I believe he is an unconscionable predator.”

America is in deep trouble. We reached our Rubicon once we unwittingly surrendered our sovereign status as Nationals to the foreign corporation, the U.S.A., Inc. through adhesion contracts and reception of its benefits; and we became transmitting utilities for our Straw Man to conduct Uniform Commercial Code transactions in their unlawful and illegal world Matrix.”

How long will we continue to ignore the plagues that have rocked society? Will we persist in playing the evil and insane game of the elite, ‘The Fourteenth Amendment Slaves Who Believe They Are Free’; or will we rise up to take back the liberty we were given by our Creator, to be free, private, independent, sovereign flesh and blood men and women before it’s too late?”

Decisions we make in regards to leadership in 2012 will make us, or it will break us. Are we so morally broken as a society, that, as the Declaration of Independence claims, ‘mankind are more disposed to suffer, while evils are sufferable, than to right themselves by abolishing the forms to which they are accustomed?’

The question is, after a long train of abuses and usurpations will we finally assume our right, our duty, to throw off such government, provide new guards for our future security, and institute new government?”

The book is available on Amazon.com now. For more information visit: http://blkmanhatesobama.com .

News Source: Conspiracy Productions :: This press release was issued on behalf of the news source by Send2Press® Newswire, a service of Neotrope®. View all current news at: http://Send2PressNewswire.com .