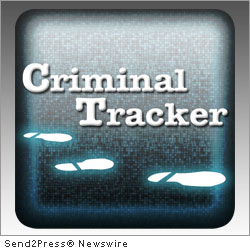 “This information is concerning,” says Simon Gojcaj, president, U.S. Publications. “That’s why we’ve decided to release this app. This app differs from similar ones in that users can enter any U.S. zip code to learn of criminals and sex offenders within a designated 40-mile range of that region in real time. Other apps only allow you to search the user’s immediate region.”

Once the zip code and mile range is entered, the app populates and tracks all sex offenders and criminals and provides names and addresses on a visual map of chosen settings.

Criminal Tracker works closely with law enforcement and the public to ensure that its database is kept up to date with the most comprehensive National Criminal Index available.

One app user said, “I could not believe who I was living by. It was a real wake-up call.”

“We live in a day and age where you just cannot be too careful,” says Gojcaj. “Neighborhood watches are often not enough and we all want to protect our children’s safety. You just never know what criminals may be lurking in your neighborhood. Criminal Tracker gives people an inside view so they are more educated and informed about local arrest warrants and more.”

Criminal Tracker’s mission is to create a better-informed citizenry, to reduce crime and to keep families as safe as possible.

News Source: U.S. Publications, Inc. :: This press release was issued on behalf of the news source by Send2Press® Newswire, a service of Neotrope®. View all current news at: http://Send2PressNewswire.com .