You are here: Home › Life on the Playground: It’s Not All Bullying – Season Two of ‘Recess Stories’ a Comedy for Kids Begins April 27!
By Send2Press Newswire on April 27, 2012 in Education, Family, Maine, Press Releases, Television, Videos 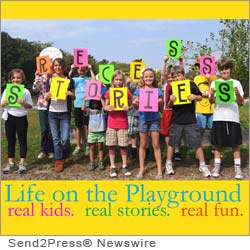 About Recess Stories:
Families have more entertainment choices today than ever. And children are watching more of their media on computers and mobile devices. Parents are rushing to find games and apps for kids to use. However most children’s programs are animated and fantasy based. The few live action shows that are produced are heavily styled and over acted – presenting a vision of childhood that is slick and sassy. Many parents wonder where the kids are. Surely there must be an alternative to talking animals and 8 year olds who sound like they are 18. Beeswax Productions produced “Recess Stories” to fill this void – real kids acting real stories in short, funny episodes.

“Recess Stories” presents a realistic slice of life on the playground. The girls have messy hair and mismatched socks, the boys are good with a ball but confused by everything else, and nobody can agree on the rules for anything. “Recess Stories” is the only original live action comedy series for elementary school kids online. Like Peanuts there are no adults, like Seinfeld there is no story too small, and like The Little Rascals childhood is presented in all its scrappy chaos.

Latham believes that Recess Stories’ quirky, addictive appeal stems from the fact that all of the episodes are based on real events: “We talked to dozens of people about their experiences on the playground and everybody has a recess story to tell. What was surprising to us going into this project was that most of the ‘stories’ that the kids told us involved small moments – the skinned knee, the perfect flip, the day a bug flew into an open mouth, the recess spent pretending to be a dog. What children find momentous can seem trivial to an adult, we wanted Recess Stories to reflect the child’s point of view.”

Latham also noted that none of the stories were about bullying which suggests that all is not bad news from the playground.

This positive approach to children’s programming has struck a chord with kids, their parents, and teachers who have longed for videos that are funny but real, educational but entertaining, and engaging without being hyperactive.

Season Two features nine new episodes including:
* The Bob & Fred War about boys fighting over which name is better;
* Believe It of Not about a girl who can’t help stretching the truth over and over again;
* Mr. Pebbles about some boys who adopt a rock as their mascot and the girls that torment them.

All episodes are based on true stories.

“Recess Stories” was shot entirely on a playground in a small town in Maine. Each episode is a complete story lasting between 2-4 minutes long and features a rotating cast of 40 kids. In addition to streaming at www.RecessStories.com, YouTube, Vimeo, Blip and iTunes, Beeswax Productions has partnered with Yahoo!Kids for an exclusive one week premiere of Season Two episodes and has released Season One as part of the commercial free lineup on the subscription platforms for kids at AmebaTV and Kidobi.

News Source: Beeswax Productions :: This press release was issued on behalf of the news source by Send2Press® Newswire, a service of Neotrope®. View all current news at: http://Send2PressNewswire.com .