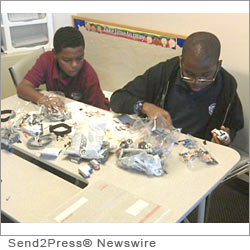 ATLANTA, Ga., April 30, 2012 (SEND2PRESS NEWSWIRE) — On May 12, 2012 from 9 a.m. to 1 p.m. at the Friendship Community Church at 4141 Old Fairburn Rd., Atlanta, GA, where the school is housed, the Fulton Leadership Academy (FLA) will hold its 2nd Annual Walk for Excellence to raise funds for the charter school’s programs.

“Charter schools don’t receive the same funding from the State of Georgia as traditional public schools,” says Aerle Wilson, the school’s marketing director and the mother of a 13 year old student at the school.

“So, we have to creatively raise funds to support the school and keep its doors open,” she continues. The all boys’ school, a 501(c)(3) charitable organization, serves grades 6-12.

“This premier charter school’s largely African American young men are brilliant young students, called ‘Scholars,’ who are considered ‘at risk’ simply because black males are considered at risk in American society,” says Wilson. But none of the Scholars has a history of delinquency or drug use. They are not runaways nor do they have most of the other characteristics of “at-risk” students.

However, because boys are being left behind at alarming rates, some have struggled in traditional school environments. But, these boys are thriving at FLA, which was created in response to these alarming statistics. They excel in FLA’s curriculum based on science, technology, engineering and mathematics (STEM) and a thematic approach that integrates experiences with aviation and aeronautics.

“Fulton Leadership Academy is determined to make a difference by molding young men who understand the value of education, who are committed to excel in all that they do, and who believe that they can, and must, give back to positively change the world in which they live,” says the School’s principal, Dr. Gavin Samms, of FLA’s mission.

Adds Wilson, “FLA’s staff, which doesn’t get paid nearly as well as they could elsewhere, is really committed to the School’s mission and these boys.” FLA’s day is long, from 7 a.m. to 4 p.m., so she says she’s appreciative of these teachers that can keep energetic and sometimes distractible boys so engaged all day.

One of the school’s most avid supporters is Attorney William Boddie, who was recently appointed Chairman of the School’s Advisory Board. Boddie says, “I got involved with the Fulton Leadership Academy last year after speaking at Career Day. I was very impressed with the intellect, high character, and discipline of FLA Scholars. It made me want to be more involved with FLA and the FLA Scholars.”

His law firm, The Boddie Law Group, LLC in Atlanta, GA contributed bottled water, granola bars, and Gatorade for last year’s Walk. The Firm also is a sponsor for this year’s event.

The Walk itself will be conducted by its participants walking around the Church’s grounds seven times-a total distance of nearly three miles. One of the reasons for this unique walk strategy is that the School is located in three different jurisdictions and permit costs to conduct the Walk on streets around the School were prohibitive for FLA. However, this is just one more example of the School’s determination to overcome its challenges.

But, the School also sees this Walk as an opportunity for participants to promote a healthy lifestyle while supporting worthy cause. “This walk will help us raise funds for the School’s general fund so we can expand FLA to serve more students,” says Wilson. “We’ve outgrown the space the Church has so graciously lent us and we need to find another, larger one.”

Events like the Walk, adds Dr. Samms, “are vital to our long term success.” He is requesting that people “consider making a donation to support the work going on at FLA and the model we are trying to create to ensure all of our boys are ultimately successful.”

The registration fee for the Walk is $20 and registration is available online by going to the site at www.fultonleadershipacademy.org and clicking “Support FLA.” Walkers my also register on site the day of the Walk between 8 – 9 a.m.

People may also donate to the School via PayPal without registering for the Walk or be a Walk sponsor or sponsor student walkers. All donations are tax deductible.

Boddie is excited about the event. “My involvement with FLA has been a very rewarding experience and I look forward to working and growing with FLA in the future,” he says. (To learn more about The Boddie Law Group, LLC visit www.boddielawgroup3.com.)

For more information about the Fulton Leadership Academy, contact:

News Source: Fulton Leadership Academy :: This press release was issued on behalf of the news source by Send2Press® Newswire, a service of Neotrope®. View all current news at: http://Send2PressNewswire.com .