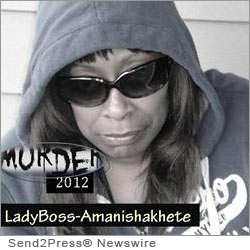 PORTLAND, Ore., May 1, 2012 (SEND2PRESS NEWSWIRE) — The Trayvon Martin murder may have grabbed national headlines over the course of 45 days, but it appears to have died down despite racial profiling and stand-your-ground, taunting black males daily. This travesty amid today’s hate-based politics inspires the release of LadyBoss-Amanishakhete’s (A-ma-ni-sha-kete) new single: “Murder 2012.”

LadyBoss, who recently added the name “Amanishakhete” to her stage persona, says that “Murder 2012” is bold with music and lyrics guaranteed to stir up a variety of emotions. Boss explains that while recording her vocals for the song, she felt enraged as well as sadness.

“This song could be considered controversial and may even anger people,” says Boss. “But the truth I speak through my lyrics need to be at the top of everyone’s mind,” Boss adds.

LadyBoss produced “Murder 2012” in cooperation with Portland Hip Hop Artist Anuff who composed the music. Anuff also composed the music and co-wrote the lyrics for Boss’s 2011 album “Epiphany of Lady,” currently being sold online at CD Baby, iTunes, Amazon.com, Amazon MP3, Last.fm and other major online retailers. As of May 1, Murder 2012 will also be downloadable from CD Baby (http://cdbaby.com/cd/ladybossamanishakhete) and soon at iTunes and other online retailers.

“People should definitely buy a copy as a reminder of Trayvon and all the issues that have come up,” says Hip Hop Artist Anuff. “Murder 2012 will cause you to think.”

LadyBoss, who sees herself as a warrior for humanity, recently redefined the term Boss (for herself) to mean ruler of oneself rather than in the traditional sense. Essentially, LadyBoss-Amanishakhete defines her name to mean “ruler of oneself through beauty and love.” Such is the mission of LadyBoss LLC which is to “Inspire humanity through the heart and soul of a woman.”

News Source: LadyBoss-Amanishakhete :: This press release was issued on behalf of the news source by Send2Press® Newswire, a service of Neotrope®. View all current news at: http://Send2PressNewswire.com .