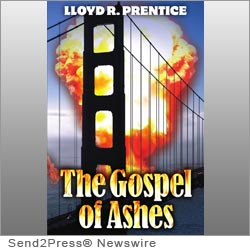 Phan and Carmichael framed as terrorists. Hunted by authorities. Killers hard on their heels. Where can they go? Who can they trust? But past is prologue. Mei Li Phan is not what she seems; Carmichael no stranger to violence. They must each relive painful history to muster the strength, courage, and cunning to survive – and more, to save the lives of millions.

According to the Council of Foreign Relations “…roughly two-thirds of terrorism in the United States was conducted by non-Islamic American extremists from 1980-2001; and from 2002-2005, it went up to 95 percent.”

Says military theorist John Robb, “Strategic attacks are possible with a network of less than 70 people.”

Author Lloyd R. Prentice says, “I’m a close follower of current events. The politics of war crimes, cult religion, and domestic terrorism fascinate and, frankly, terrify me. The Gospel of Ashes asks ‘what if?'”

Scheduled for June 2012 release by Writers Glen Publications, “The Gospel of Ashes,” ISBN 978-0-9825892-2-9, is distributed through Ingram Book Company and can be purchased through Amazon and other major on line booksellers, from independent bookstores by request, or direct from the publisher at: sales@writersglen.com.

News Source: Writers Glen Publications :: This press release was issued on behalf of the news source by Send2Press® Newswire, a service of Neotrope®. View all current news at: http://Send2PressNewswire.com .