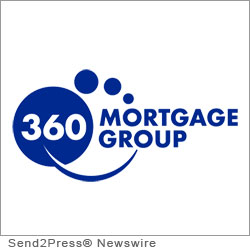 Borrowers whose application date was listed after December 1, 2011 are eligible to take part in 360 Mortgage Group’s participation with HARP 2.0. Additionally, all EA-I, II, III, and occupancy loans are HARP-eligible with unlimited LTV and CLTVs with AU Approval. 360 is also accepting existing MI transfers and no appraisals will be required on loans receiving a Property Fieldwork Waiver. There is no limit to the number of financed properties owned by a borrower that can be considered HARP-eligible and no minimum FICO is required.

Since first accepting HARP 2.0 applications, 360 Mortgage Group’s active loan pipeline has increased by almost 700 percent and 360 expects customer participation with HARP only to increase in the coming months. As a result of its increased loan activity, 360 is adding staff.

“We’re focused on making quality hires as rapidly as possible, adding expert staff to meet the daily increasing demand both for HARP and all other loan types,” said Mark Greco, President of 360 Mortgage Group.

“360 has truly embraced the spirit of HARP 2.0,” Greco said. “If homeowners have made their payments without fail throughout the past four years during an economic crisis, then they are going to continue to make those payments now. These homeowners see their home as just that – a home – and not just an investment. These are the people that Fannie and Freddie are seeking to help right now, and so is 360.”

About 360 Mortgage Group, LLC:
Established in 2007, 360 Mortgage Group LLC is a privately owned mortgage bank that has successfully utilized its high-technology platform to provide better communication and customer service to business partners. An approved Fannie Mae seller/servicer, 360 Mortgage Group is headquartered in Austin, Texas and services more than 25 states across the United States.