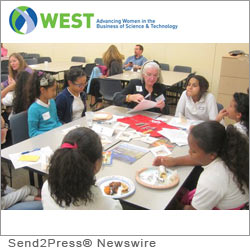 CAMBRIDGE, Mass., May 17, 2012 (SEND2PRESS NEWSWIRE) — WEST: Advancing Women in Science and Technology hosted a Career Mentoring event for 80 Girl Scouts that ranged from grades 4 to 12. WEST taps into its community of women scientist, engineers and technologist as career mentors to hold events for young girls as well as early and mid career women.

On Friday, May 11, 2012, WEST held a Career Mentoring event for 80 Girl Scouts from Eastern Massachusetts made possible by the Mathworks who sponsored the event, and by Microsoft who provided WEST with the venue.

Having women role models representing different career paths for the young girls show them that it is possible for women to work in science, engineering and technical fields. The Girls Scouts were inspired by this event and realized that professions are not limited to any gender, or in general, any person.

One Girl Scout said, “I didn’t know there were so many different things you could do when you are older and to never give up.”

Another young girl proclaimed, “No matter what, there is something out there for everyone.”

The Career Mentoring Event was also rewarding for the career mentors as well.

Ilene Fischer, WEST’s Executive Director said “WEST has a membership of 500-plus women in science, engineering and technology, they are great role models and career mentors for these young girls. This is WEST’s way of giving back and of developing the future leaders in Science and Technology.”

The event was successful, an unforgettable, life changing event for the girls, their parents and the mentors. By the end of the evening, the Girl Scouts, parents, and career mentors were moved and inspired by the new possibilities they had in front of them.

About WEST:
WEST: Advancing Women in Science and Technology is a 501(c)3 Massachusetts based non-profit. WEST’s mission is to promote, advance, and develop women in Science, Engineering, and Technology as leaders, advocates, C-level executives and thought leaders that make a profound difference in the communities they serve.

WEST is a community and a forum, for early, mid-career, executive and entrepreneurial women. Through participation our members become inspirational leaders and role models for their teams, organizations and businesses.

News Source: WEST: Advancing Women in Science and Technology :: This press release was issued on behalf of the news source by Send2Press® Newswire, a service of Neotrope®. View all current news at: http://Send2PressNewswire.com .