You are here: Home › Volunteers Voters Pledge Their Votes to the Most Charitable Political Party on VotesForCharity.org
By Send2Press Newswire on May 24, 2012 in Elections and Politics, Internet, Opinion, Pennsylvania, PHILADELPHIA, Pa., Press Releases, Videos 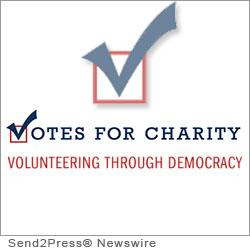 PHILADELPHIA, Pa., May 24, 2012 (SEND2PRESS NEWSWIRE) — Inspired by the millions of dissatisfied Americans taking to the streets, Votes for Charity, Inc. is a democratic outlet for the disenfranchised voters in this country. Instead of voting for the status quo, the “Volunteer Voters” will be able to use their vote to redirect millions of dollars from political propaganda, to the best charities in America.

“The powerful elite are, to a large extent, ignoring their duty to represent the American people and safeguard the American dream,” said Ben Barnett, co-Founder of Votes for Charity, Inc. and a Volunteer Voter.

“Meanwhile, the majority of American people, while quite vocal, have yet to unify their message. They need to unite under a common purpose, sending a clear and powerful statement of their dissatisfaction to those in power. Votes for Charity, Inc. is the most charitable and democratic statement possible and it is our way of uniting with force behind clear priorities that politicians have ignored for too long. By joining our cause as a Volunteer Voter, eligible Americans will pledge their vote to the candidate whose supporters give the most money to charity via our online ‘Giving Contest’ during the 2012 Presidential Campaign.”

Step One: Eligible voters all over the United States will come to http://www.VotesForCharity.org to sign up as Volunteer Voters, and to pledge their votes to the most charitable party in VotesForCharity.org’s “Giving Contest.”

Step Two: Donors who care about the outcome of the 2012 Presidential Election will visit VotesForCharity.org to donate to one of our 80, 4-star rated (the highest rating possible on CharityNavigator.org), non-partisan, domestic charities in the name of the political party they support. The total donations made in the name of each party represents the “bid” of that party, in a “Giving Contest” for the allegiance of all the Volunteer Voters.

Step Three: In early November, Votes for Charity will end the “Giving Contest” and announce a winning party. We will also announce the total amount given to charity in the next 5 months.

Step Four: On Tuesday, November 6, all Volunteer Voters will honor our promise and head to the polls to Vote for Charity. We will act in the manner we had hoped our elected officials would act, and we will show Americans that even if we can’t trust the political elite, we can still trust each other. Our unified votes may even ensure victory for the candidate representing America’s most charitable political party.

Votes for Charity has the potential to become the largest, most democratic, most charitable protest of all time. In joining our cause, the American people have the ability to show the major parties just how far removed they are from our vision for America, and to do so charitably!

News Source: Votes for Charity, Inc. :: This press release was issued on behalf of the news source by Send2Press® Newswire, a service of Neotrope®. View all current news at: http://Send2PressNewswire.com .