You are here: Home › Illinois’ Own Twyford BBQ and Catering Places Top 10 at Memphis in May
By Send2Press Newswire on May 24, 2012 in Awards and Honors, Food, Illinois, Press Releases, Restaurant, Hotel and Hospitality, Videos 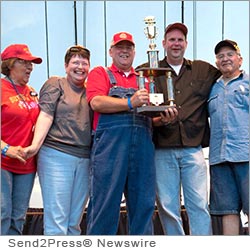 JACKSONVILLE, Ill., May 24, 2012 (SEND2PRESS NEWSWIRE) — It’s truly rib ticklin’ news. A Jacksonville caterer – Twyford BBQ and Catering – is pleased to announce that it placed seventh in the rib category out of 121 teams that competed at the Memphis in May World Barbecue Championship.

And, it’s not the first time. After only two years of competing in this world championship barbecue event, Twyford BBQ and Catering placed in the top 10 both times.

“From what I’ve been told by others attending the event, this is unheard of,” Randy Twyford, pitmaster and owner of Twyford BBQ and Catering, says.

Three on-site judges determined the fate of the competitors and two of the judges gave Twyford’s ribs 10 out of 10. They commented that the ribs had just the right amount of smoke and flavor with the perfect amount of heat at the end. They reported that the sauce complemented the ribs, but did not overpower the pork.

The award-winning baby back ribs came from Wichita Packing in Chicago. Twyford says that they provide some of the best quality around.

“We used the same sauce on these award-winning ribs, that we use and sell in our shop and online,” Twyford says. “So, you see, all of our customers – old and new – can be grand champions too. It’s Illinois barbecue at its best.”

The sauces come in two flavors – mild and sassy – and have no artificial preservatives, colors or flavorings.

About Twyford Catering:
Competing since 2004, Twyford BBQ and Catering was born out of passion for great food. Its credibility comes from its competition background and its barbecue has been professionally judged and awarded top honors by a field of certified, professional food judges that include some of the top names in the barbecue and food world.

Twyford has also appeared on ABC News: Channel 20; and Fox 13.

News Source: Twyford BBQ and Catering :: This press release was issued on behalf of the news source by Send2Press® Newswire, a service of Neotrope®. View all current news at: http://Send2PressNewswire.com .