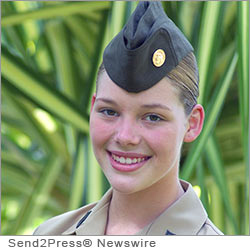 Young Marine Sergeant Major McCall Behringer (17) joined the Hamilton Young Marines, Baltimore, Md. in 2006 when she was 10 years old. She has earned over 120 awards with the Young Marines program including three Personal Commendations, the Meritorious Service award issued at the national level and is the 13th recipient of the coveted Young Marines Distinguished Order of Merit.

National Executive Director Mike Kessler said Behringer will do very well as a national representative of the Young Marines organization. “She has truly done it all. Her demonstrated leadership, judgment, initiative and poise under pressure make her an outstanding selection to carry the mantle of her predecessor,” said Kessler. “Her interview with the selection board demonstrated that she was not only very knowledgeable of the Young Marines program but was able to articulate in such a way that she was proud of her association with the Young Marines. And what I like most about this selection is that she legitimately cares about the kids who make up our membership.”

Behringer’s accomplishments are exemplary and she has participated in numerous events to represent the Young Marines organization on a national level. Prior to her selection as National Young Marine of the Year, she has been active in promoting the organization from an interview with former Vice President Dick Cheney to most recently a guest on Voice America’s TAGG program.

In December, Behringer traveled to Oahu, Hawaii for the 70th anniversary of the attack on Pearl Harbor with 286 Young Marines from across the country. She was also selected to represent the national program with her fellow Division Young Marines of the Year on the Iwo Jima reunion of honor in March, 2012.

Behringer is currently a junior at Perry High school in Maryland. Upon graduation from high school, Behringer plans to attend college and become a lawyer.

About The Young Marines:
The Young Marines is a national non-profit 501c(3) youth education and service program for boys and girls ages 8 through completion of high school. The program focuses on teaching the values of leadership, teamwork and self-discipline so its members can live and promote a healthy, drug-free lifestyle. The national organization is comprised of over 10,000 youths and 2,800 adult volunteers in nearly 300 units throughout the United States and affiliates overseas. More information: http://www.youngmarines.com .

News Source: Young Marines :: This press release was issued on behalf of the news source by Send2Press® Newswire, a service of Neotrope®. View all current news at: http://Send2PressNewswire.com .