You are here: Home › Adventure, Intrigue and Murder Surround the Life and Death of Aloha Wanderwell
By Send2Press Newswire on May 31, 2012 in Automotive, California, Movies and Film Making, Press Releases, Videos, Women’s Interests 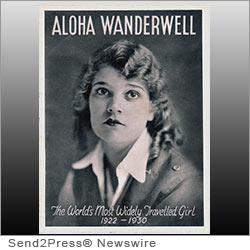 NEWPORT BEACH, Calif., May 31, 2012 (SEND2PRESS NEWSWIRE) — Richard Diamond, founder of AlohaWanderwell.com, announced this week that June 4, 2012 marks the sixteenth anniversary of Aloha Wanderwell’s death, the first woman to travel around the world in an automobile – a Model T Ford that she affectionately named “Little Lizzie.” Aloha was 16 when she began this journey in 1922.

While a convent school student in France, Aloha responded to a newspaper ad enticing a young woman to be the recording secretary for an around-the-world expedition. This was the beginning of a remarkable life-long series of adventures, best summed up by Aloha in her unpublished memoir, “The Driving Passion.”

Aloha traveled to 43 countries in four continents. She fell in love with her traveling companion, Captain Walter Wanderwell, and they married midway through their journey. In 1929, the initial expedition ended, but their adventures continued.

Next, the Wanderwells traveled to the Mata Grosso region of the Amazon basin, where their plane went down in the unexplored Brazilian jungle. Aloha remained behind with an indigenous tribe while Walter traveled back to civilization to secure replacement parts – a trek that took several months.

With their travels fully-documented in a film titled, “With Car and Camera around the World,” they returned to the U.S. in 1931 to make plans for future expeditions, but tragedy and scandal struck. In 1932, Walter was shot and killed by an unknown assailant on the couple’s 110-foot yacht – The Carma – in Long Beach, California. Aloha remarried and thereafter was known as Aloha Baker. She continued her adventures as an explorer, documentary filmmaker, author and lecturer.

“To capture this adventure and intrigue, I founded AlohaWanderwell.com to pay tribute to Aloha’s life and times,” Diamond, Aloha’s grandson and conservator, says. “Currently, I’m working with Alan Boyd and the Boyd Production Group to transfer Aloha’s nitrate films to HD and to preserve collectibles, photographs and documents.”

Some of Aloha’s films can be found in the Library of Congress; the Smithsonian; the Los Angeles Natural History Museum; and the Academy of Motion Picture Arts and Science.

A full-length documentary is also in the works. To watch a sample reel of “Aloha Wanderwell’s Driving Passion,” directed and edited by Alan Boyd, visit: http://www.youtube.com/watch?v=C01muLsvJ3g .

For more information, visit: www.AlohaWanderwell.com or http://www.facebook.com/AlohaWanderwell . An e-book on Aloha will be coming soon and updates will be provided.

– Photo Caption: Aloha Wanderwell – the first woman to circle the globe in an automobile.