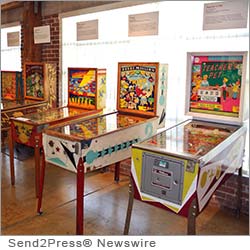 ALAMEDA, Calif., May 31, 2012 (SEND2PRESS NEWSWIRE) — The Pacific Pinball Museum (PPM) proudly announces the opening of the Pinball Oddity exhibit, featuring a collection of pinball rarities and giant mural reproductions of pinball art. The exhibit represents the first in a series of scalable exhibits the museum offers for lease to institutions nationwide.

Pinball Oddity includes pinball machines that may be the last of their kind as most pinball games were simply thrown away and replaced with newer ones; machines from the 1930s, ’40s and ’50s are increasingly valued for their originality and rarity. Among the machines on display (but not available for play) is the only known surviving copy of Cargo, the Bay Area-themed Sky Rocket and a Korean War-era celebration of patriotism: Paratroopers. Rip Snorter and Teacher’s Pet include the rare depiction of children in pinball art and the Thing’s almost R.Crumb-style backglass tells a story unlike any other game.

Opening receptions for the exhibit take place June 8 and July 13 from 6 to 9 p.m. at the Rhythmix Cultural Works K Gallery located at 2513 Blanding Avenue in Alameda. The openings are free and open to the public. Pinball Oddity features rare and unusual pinball games from the museum’s collection and pinball back glass murals by Alameda-based artists d’Arci Bruno, Ed Cassel, Eric J. Kos and San Rafael-based artist Dan Fontes.

“These shows are unique in that they can be scaled up or down to fit a specific venue. Our large collection of machines and murals makes it possible present exhibits on many different subjects,” said Museum Founder and Director Michael Schiess. “The show can be made interactive or non-interactive depending on the desired configuration and whether we include playable games.”

Some of the themes of the collections are:

* Machines from the 1930s – technological and design changes of the Depression era. A discussion of the history of pinball and the introduction of art into the machine.

* Art Movements in Pinball: Art Deco, Streamline Moderne, Cubism and others are represented and discussed.

The Pacific Pinball Museum:
PPM is a 501(c)3 non-profit organization dedicated to teaching science, art and history through pinball and preserving and promoting one of America’s great pastimes. More information: http://www.pacificpinball.org .

Photo Caption: Rare machines from 1938 are part of the unique show “Pinball Oddity” at Rhythmix “K Gallery” in Alameda, Calif.