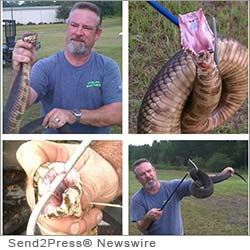 SANFORD, Fla., May 31, 2012 (SEND2PRESS NEWSWIRE) — Wildlife Solutions, a local wildlife control company, is going to be featured on the Nat Geo WILD channel this Sunday, June 3, at 9 p.m. EDT. The show is called “Animal Superpowers: Extreme Hunters” and it spotlights a Wildlife Solutions technician capturing and handling a deadly venomous snake while explaining how they locate and track their prey.

Steve DeMoor, President of Wildlife Solutions stated, “We’re honored to have been selected for this television series – it’s a testament to the professionalism of our team. We hope that through this we can help educate our communities about the dangers of wildlife. Through better understanding, it makes it easier for humans and wildlife to coexist peacefully.”

About Wildlife Solutions, Inc.:
Wildlife Solutions is a local company that is nationally recognized for its professionalism and skill in capturing and resolving problems with wildlife and other dangerous animals. Wildlife Solutions and their signature zebra striped trucks have been servicing the community for nearly 20 years. For print-ready images email: info@wildlifesolutions.com.

More information can be found at http://www.wildlifesolutions.com.

News Source: Wildlife Solutions, Inc. :: This press release was issued on behalf of the news source by Send2Press® Newswire, a service of Neotrope®. View all current news at: http://Send2PressNewswire.com .