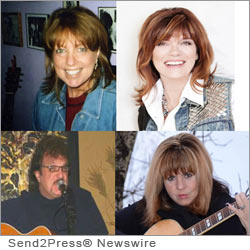 The first show will be Monday night, June 11, at The Bitter End in Greenwich Village with the second show the following Thursday evening, June 14, at The Living Room on the Lower East Side.

Leading the performances will be Jane Bach, writer of hit songs for Reba McEntire, Jo Dee Messina and others. A frequent performer at writer’s rounds in cities from coast to coast, Bach will be the host as well as one of the singers. “A writer’s round program is one of the best ways for an audience to get up close and personal with the writers and their songs,” Bach notes.

“These will be evenings of subtle excitement,” says Piller, who will be performing numbers from her current album, “Days Like These,” as well as from her new 6-song EP, “Love Goes On,” dedicated to her late husband, Michael Piller.

Appearing with Piller and Bach will be Emmy-nominated NYC singer-songwriter Kati Mac whose song, “Only Love,” was the theme for the daytime drama, “Guiding Light.” In addition to singing on numerous commercial jingles, she has toured or recorded with Sting, Meat Loaf, and Nona Hendryx. Also appearing will be Billy Lee, writer of “The One,” a Top Five hit for Gary Allan. Making a special appearance at The Bitter End show will be Jake Holmes, writer/performer of “Dazed and Confused,” which has been recorded by the Yardbirds and Led Zeppelin.

Both events will follow the classic format of the round, where each songwriter plays one of their songs, followed by the next singer-songwriter, and the next, and so on. They can join in with each other, add harmonies, contribute a guitar riff, perform a little percussion, or just listen along with the audience.