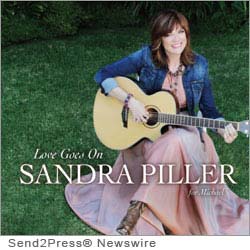 It’s a double treat for Piller, who will have a table in the Vendors Room to sell her CDs, merchandise, and specially selected items from Michael’s personal Star Trek collection. In addition, she will be performing on stage with Bach in a Writer’s Round at 4 p.m. on Saturday the ninth. Everyone is invited to stop by the booth for further details about the performance.

“The writer’s round will have lots of songs plus the sharing of stories about how they were written,” states Piller. “This will be exciting as we will be performing radio hits and songs that are so new they haven’t been recorded yet,” notes Bach.

“This will be emotional for me,” says Piller, who will be performing numbers from her current album, “Days Like These,” as well as from her new 6-song EP, “Love Goes On,” dedicated to her late husband, Michael Piller.

In addition to writing and collaborating on songs with major and indie recording artists, Bach was producer of Piller’s most recent album and the new EP. She is a strong supporter of the writer’s round format: “There’s nothing quite like it. And you never know when you’ll be hearing a song that will become the next big hit,” she adds.

Bach and Piller have been leading writer’s round events in various parts of the country, including a sold out show at the famed Bluebird Cafe in Nashville. “These types of programs encourage conversation between the writers, giving the audience an opportunity to hear the creators interact almost as if in their own living rooms,” Piller notes.

Sandra Piller will be at the Star Trek convention Saturday, June 9, at the Gaylord Opryland Hotel, 2800 Opryland Drive, Nashville, TN 37214.

For more information about this event or to schedule an interview with Jane Bach and Sandra Piller (www.sandrapiller.com) of Shady Hill Records, please contact John Scott G of G-Man Marketing.