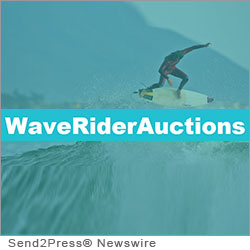 HUNTINGTON BEACH, Calif., June 5, 2012 (SEND2PRESS NEWSWIRE) — On Saturday August 18, 2012 Waverider Auctions will hold one of the largest main land surf charity auction events in history. Charities benefiting from a percentage of the auction fees will be: The International Surf Museum, The Surfrider’s Foundation, Wounded Warriors Project and CHOC Hospitals, according to Seth Schiller, producer of the event.

“Since Southern California was so critical to the birth and explosive growth of America’s surf industry, it’s no surprise it’s also home to some of the most rare and valuable surfboards in the world,” says Schiller.

Some of these legendary surfboard shapers, surfers, surf shops and private owners are offering their rare, private collections to be auctioned off for this historic surf charity auction event, “The 2012 U.S. Vintage Surf Charity Auction and Ocean Art Sale.”

History will be made on a number of fronts. According to Mr. Schiller they will be auctioning off an original Bob Simmons surfboard. The last Simmons that sold at auction went for $40,000 in 2009. We could get bids in excess of $60,000 for this board, making it one of most expensive and valuable surfboards in the world.

We will also be auctioning off many personal boards owned and ridden by some iconic surf stars and local surf shop owner’s like surf champion Rockin Fig. Internationally renowned surfboard shaper and designer, and Huntington Beach local, Bob “The Greek” Bolen will be shaping and designing one of his famous 60’s “ELIMINATOR” especially for sale at the auction. Bob Ballou, “Car Salesman to the Surf Stars,” will also have a rare “Red Fin” surfboard put up for auction at this charity event.

(No celebrity endorsement claimed or implied.)

The live auction will run 5 – 9 p.m., August 18, 2012. The Ocean Art show, surf rock concert and public viewing of the historic surfboards up for auction will be from Noon to 4 p.m. A private VIP pre-auction party and press event is schedule between 4 – 5 p.m.

About Waverider Auctions:
Waverider Auctions (www.waveriderauctions.com) is owned and operated by Seth Schiller, a 35-year veteran of the Southern California advertising industry. His long time love of surfing and his belief in giving to charity lead him to organize this historic surf charity auction event.

Gary Sahagen is a lifetime surfer, surf historian and former Director / Trustee of the International Surf Museum; and current director of “The HB Long Board Crew.” He is considered one of the world’s foremost authorities on authenticating surf artifacts and surf memorabilia.

News Source: Waverider Auctions :: This press release was issued on behalf of the news source by Send2Press® Newswire, a service of Neotrope®. View all current news at the Send2Press for Journalists Portal: http://Send2PressNewswire.com .