You are here: Home › WEST Ensures Visibility for Board Members: CEO Kip Hollister is the Entrepreneur Of The Year 2012 Award winner in New England
By Send2Press Newswire on June 27, 2012 in Awards and Honors, BOSTON, Mass., Massachusetts, NonProfit, Press Releases, Technology 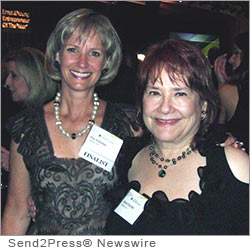 BOSTON, Mass., June 27, 2012 (SEND2PRESS NEWSWIRE) — WEST, Advancing Women in the Business of Science and Technology, continues its mission to bring visibility to woman leaders by nominating Kip Hollister as Entrepreneur of the Year in Service and Kip was awarded the honor. WEST demonstrated its key success factor of Visibility by nominating two advisory board members: Kip Hollister, CEO Hollister, a leading staffing firm, and Barbara Lynch, James Beard Award Winning Chef and serial restaurateur; to the Ernst and Young Entrepreneur of the year.

Both Kip and Barbara were chosen as finalist for the Ernst & Young Entrepreneur Of The Year(R) 2012 Award. During a special gala honoring all of the finalists, Kip was selected by an independent panel of judges and the award was presented at a special gala on Thursday, June 21, 2012.

The award recognizes outstanding entrepreneurs who demonstrate excellence and extraordinary success in such areas as innovation, financial performance and personal commitment to their businesses and communities.

“It was a very exciting night for WEST having two advisory board members as finalists for the Ernst & Young New England Entrepreneur of the Year – and having Kip win the New England award in service,” said Ilene Fischer, said Ilene Fischer Executive Director of WEST. “It was a demonstration of WEST’s commitment to ensuring visibility for its entrepreneurial women.”

“I am humbled by this award and am always seeking to improve as a leader and entrepreneur,” said Kip Hollister. “It is my staff I have to thank who are always up for the challenges I put in front of them when it comes to leadership development, and excellence in service delivery.” Kip is committed to creating a workplace based on values, and building a corporate culture to last. She is also dedicated to the community and workforce development initiatives, which led to developing a training division within Hollister to deliver Leadership and Communication programs.

WEST, Advancing Women in the Business of Science & Technology’s focus on key success factors in STEM to be successful in their career, as researched through studies by Catalyst, Harvard Business School and the Anita Borg Institute: They are Performance, Visibility, Leadership experience and Sponsorship.

Both finalists were honored at the evening gala with a video created to highlight their work. WEST plans to nominate Barbara Lynch again to continue to support her extraordinary work in nutrition, and in hospitality.

Barbara said, “I was so honored to be with so many entrepreneurs, and I am a thrilled WEST will nominate me next year, now I am in it to win it.”

Now in its 26th year, the Ernst & Young Entrepreneur Of The Year Program has honored the inspirational leadership of such entrepreneurs as Jeff Bezos of Amazon.com, Michael Dell of Dell Inc., Herb Kelleher of Southwest Airlines, Fred Smith of FedEx, Larry Page and Sergey Brin of Google, Richard Schulze of Best Buy, Andrew Mason of Groupon, Mindy Grossman of HSN, Inc., Reid Hoffman and Jeff Weiner of LinkedIn, and many more.

As a New England regional award winner, Kip is now eligible for consideration for the National Entrepreneur Of The Year 2012 Award. Award winners in several national categories, as well as the National Entrepreneur Of The Year Overall Award winner, will be announced at the annual awards gala in Palm Springs, California, on November 17, 2012. The awards are the culminating event of the Ernst & Young Strategic Growth Forum(R), the nation’s most prestigious gathering of high-growth, market-leading companies.

News Source: WEST: Advancing Women in Science and Technology :: This press release was issued on behalf of the news source by Send2Press® Newswire, a service of Neotrope®. View all current news at the Send2Press for Journalists Portal: http://Send2PressNewswire.com .