You are here: Home › From Baseball to The Beatles, Ruth Roberts Music Is In Your Life
By Send2Press Newswire on July 2, 2012 in California, Education, LOS ANGELES, Calif., Music, Press Releases, U.S. Newswire Stories, Videos 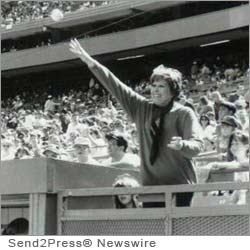 LOS ANGELES, Calif. (SEND2PRESS NEWSWIRE) — On the list of celebrated songwriters from the 1940s through the 1990s is the name of Ruth Roberts (www.ruthrobertsmusic.com). While not as well-known as some of her contemporaries, you have heard her work because Ruth Roberts’ songs are played in schools, sports stadiums and entertainment venues as well as broadcast to multiple generations of listeners year round.

“Ruth Roberts created one of the most famous sports songs in the history of our country,” says Susan Nicoletti, Director of Operations for Goldenrod Music, the publishing company that oversees Roberts’ songs. “Everyone expects the writer of a hit sports song would be a man, but Ruth wrote ‘Meet the Mets’ as the theme song for the New York Mets,” Nicoletti added.

Another song of Roberts, “It’s a Beautiful Day for a Ball Game,” is the theme for the Los Angeles Dodgers and is part of their radio broadcast before every one of their games.

Beatles fans probably know the Fab Four recorded “Mailman Bring Me No More Blues,” which appears on the “Anthology 3” album. Written by the hip-before-her-time Roberts, the tune was also recorded by Buddy Holly, Oliver Nelson, and Lefty Frizzell.

Roberts’ songs have been utilized in such movies and TV shows as “Yes Man,” “The Benchwarmer,” “A Dirty Shame,” “Everybody Loves Raymond,” “Seinfeld,” and Conan O’Brien.

Influenced by the Broadway shows she saw as a teen-ager, Roberts wrote full-length and elementary school mini-musicals which appeal to the “Glee” fan in everyone. In observance of the July 4th holiday, two of Roberts’ musicals are of special interest: “Betsy Ross and the First American Flag,” and “Tall Tom Jefferson.”

Teachers and educators can discover more about her musicals written for a Kindergarten-through-grade-9 curriculum by visiting the Michael Brent Publications website at michaelbrent(dot)com.

Video of an excerpt from Ruth Roberts’ “Tall Tom Jefferson”