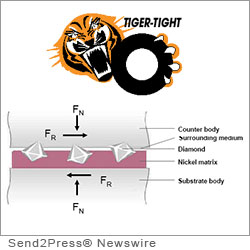 The TIGER-TIGHT technology operates on a micro-topographic scale. Industrial diamonds embedded in an electro-less nickel matrix penetrate and interlock with the mating surfaces to create an extremely high retaining force and prevent loosening under vibration and shock. (*See the Diamond Matrix Graphic below.)

Because the interaction is at the micro level, there is no critical damage to the affected surfaces.

About SpaceX:
SpaceX designs, manufactures and launches the world’s most advanced rockets and spacecraft. With a diverse manifest of 40 launches to deliver commercial and government satellites to orbit, SpaceX is the world’s fastest growing launch services provider. In 2012, SpaceX made history when its Dragon spacecraft became the first commercial vehicle in history to successfully attach to the International Space Station-a feat previously achieved by only four governments. With the retirement of the space shuttle, the SpaceX Falcon 9 rocket and Dragon spacecraft are carrying cargo, and one day astronauts, to and from the space station for NASA.

Founded in 2002 by Elon Musk, SpaceX is a private company owned by management and employees, with minority investments from Founders Fund, Draper Fisher Jurvetson, and Valor Equity Partners. The company has more than 1,800 employees in California, Texas, Florida and Washington, D.C. For more information, visit http://spacex.com/ .

News Source: Tiger-Tight Corp :: This press release was issued on behalf of the news source by Send2Press® Newswire, a service of Neotrope®. View all current news at the Send2Press for Journalists Portal: http://Send2PressNewswire.com/ .