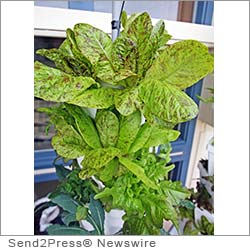 “Green Planet Productions has always produced influential environmental films and its productions have inspired many people to invest in new energy efficient technologies and reduce wasteful habits,” said Cutter. “Their production team was top-notch and we enjoyed showing them how we are making a difference.”

Green Planet Productions is a Santa Monica-based film studio specializing in environmental documentaries that are spreading awareness on ways to live more sustainably. In 2008, their documentary “FUEL” received an Audience Award for Best Documentary at the Sundance Film Festival. “The Big Fix” was an “Official Selection” of the 2011 Cannes Film Festival.

“Three years of research and testing of hydroponic vertical farming systems led me to the conclusion that Verti-Gro offers the most easy-to-use food growing process with the best yield and most efficient use of resources and space,” said Cutter. “I am happy to see that Green Planet Productions felt our work in this area was important enough to capture on film.”

EnviroIngenuity recently completed two 22-tower systems with nearly 1,000 plants, each on private properties in Laguna Beach, and is working now on developing its new commercial demonstration center in Laguna Canyon to be completed this summer. Each location utilizes the Verti-Gro® system, featured at the Epcot® theme park at Walt Disney World Resort in Orlando, Florida for the past 16 years.

“The Verti-Gro system uses no soil, 90 percent less water, 70 percent less land and 50 percent less fertilizer than traditional organic farming,” said Cutter. “Verti-Gro hydroponic commercial and home garden systems produce clean, natural food much faster than traditional farming and allow plants to grow bigger and stronger. These systems are especially effective in small urban spaces and can be set up to recirculate and automatically water the plants for even greater resource efficiency.”

“Green Planet will help us teach young people that they can grow clean food using the Verti-Gro system, thus connecting them to where their food comes from,” said Cutter. “Hydroponic vertical farming allows us to create jobs by developing urban farming entrepreneurs who will grow local and sell healthier, great tasting produce within their local communities.”

News Source: EnviroIngenuity :: This press release was issued on behalf of the news source by Send2Press® Newswire, a service of Neotrope®. View all current news at the Send2Press for Journalists Portal: http://Send2PressNewswire.com/ .