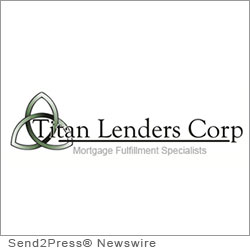 DENVER, Colo., July 24, 2012 (SEND2PRESS NEWSWIRE) — Mortgage fulfillment outsource services expert Titan Lenders Corp. (Titan) is marking the fifth anniversary of its founding. “We launched Titan Lenders Corp. in 2007 in the midst of the mortgage meltdown, and five years later, I am proud that Titan is a growing success story for our industry. Our original vision was to emphasize quality in loan production through process management, standardization, and transparency. Today, that mission has been validated by the overwhelming response of the industry for our services, technology, and expertise,” said Titan founder and President Mary Kladde.

“Having recently joined Titan Lenders Corp., I am very impressed by what the firm has accomplished during these challenging five years,” said Aydelotte. “Our Risk Management Services have enjoyed enthusiastic responses from the industry. In line with our business growth model, Titan will continue to expand and diversify its capabilities over the coming months.”

In 2008, Titan sensed that market compression would lead to substantive opportunities for community banks and credit unions to capture market share and launched its Mortgage Access Program (MAP) to reduce the risk and expense of providing quality mortgage lending services.

Throughout 2008 and 2009, Titan took a high-profile position on the industry’s liquidity challenges related to the dwindling availability of warehouse lines. In 2009, Flagstar Bank named Titan a preferred provider for its wholesale lending business’s broker-to-banker initiatives.

In 2011, Titan led the industry in developing MERS(R) Quality Assurance services to assist mortgage servicers and sub-servicers in meeting MERSCORP’s new processing and quality assurance requirements. This division offers audit services for the Annual Report and/or a fully MERS(R) interfaced data reconciliation tool to validate and remediate errors within the MERS(R) system.

In 2010 and 2011, Titan recruited a new General Counsel, Mark Ridder and a new CFO, Bill Walsh, to support this meteoric growth. Titan also received its national certification as a Women’s Business Enterprise (WBE) by the Women’s Business Enterprise National Council (WBENC). Titan has been listed among the industry’s Top 50 Service Providers by Mortgage Technology magazine in 2012, 2011 and 2009. Its executives have been frequent contributors to industry media and thought leadership via its contributed articles.

“Titan Lenders Corp. set out to be an agent of change for the industry in 2007, but we had no way of knowing that the tide would turn as radically or as quickly in the direction we had envisioned,” said Titan executive vice president Ruth Lee. “As a career mortgage professional, a policy wonk by instinct and a debater by training, I have found the last five years exhilarating, but that pales in comparison with the rush I’ve experienced in being ‘part of the cure’ versus ‘part of the disease’ in the reformation of the mortgage lending economy.”

About Titan Lenders Corp.:
Titan Lenders Corp. (www.TitanLendersCorp.com) is one of a specialized few providers of mortgage back office fulfillment services, a not-well-understood facet of mortgage lending that includes closing, funding and post closing services. Community banks, credit unions, mortgage bankers and brokers, and warehouse line lenders use outsource providers strategically to minimize compliance risks in a time-sensitive error-averse environment. Fluctuations in mortgage lending volume also lead some mortgage lenders to outsource their entire back office operation and secure predictable “per transaction” pricing rather than maintaining an inflexible static in house staff.

News Source: Titan Lenders Corp :: This press release was issued on behalf of the news source by Send2Press® Newswire, a service of Neotrope®. View all current news at the Send2Press for Journalists Portal: http://Send2PressNewswire.com/ .