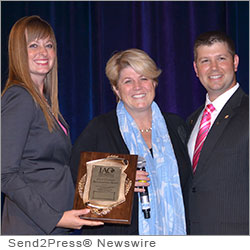 This was the second year the Chuck Cumberlin award was given. It was created in honor of Hall of Fame auctioneer and former NAA President Chuck Cumberlin.

Hannes Combest, CEO of the National Auctioneers Association, explained: “This award is given annually to an individual who typifies Mr. Cumberlin’s love for the industry and his attention to other auction professionals. Kathy is an individual who is passionate about benefit auctions and who mentors and encourages her colleagues in every way possible. She epitomizes the spirit of what Mr. Cumberlin brought to the industry and Kathy is truly an Auctioneer’s Auctioneer.”

“I was sitting between my auctioneer colleagues Tirhani E. Mabunda from South Africa and Denis Barrett from Ireland at the International Auctioneer Championship finals when I was announced as the Chuck Cumberlin Sportsmanship award winner,” said Kathy Kingston. “This honor was a surprise and it is quite meaningful to me as Chuck Cumberlin was a beloved legend and leader in our profession, as well as my first instructor at Missouri Auction School in 1986.”

News Source: Kathy Kingston :: This press release was issued on behalf of the news source by Send2Press® Newswire, a service of Neotrope®. View all current news at the Send2Press for Journalists Portal: http://Send2PressNewswire.com/ .