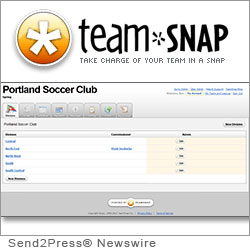 BOULDER, Colo., July 31, 2012 (SEND2PRESS NEWSWIRE) — TeamSnap, a mobile and web service used by almost a million and a half players, parents and coaches to manage sports teams and leagues, announced that West Ottawa Soccer is now using TeamSnap for Clubs and Leagues. With over 21,000 members, West Ottawa Soccer is the second largest soccer club in Canada.

West Ottawa is using TeamSnap for Clubs and Leagues to communicate with its members and manage the schedule for each of its teams. In addition, West Ottawa provides each team with TeamSnap’s team management tools. These tools allow individual teams to track which players are coming to the games, manage the refreshment schedule, track statistics and standings, and much more.

“How do I reach 21,000 people in one click?” asked Ray Scobie, West Ottawa Soccer Head Coach. “The answer is TeamSnap. As Club Head Coach of West Ottawa Soccer, the second largest soccer club in Canada, I need to be able to reach out to a lot of people (at least 21,000 people or more at a time) in a simple, fast, and straight-forward fashion. TeamSnap has provided the platform to do this.”

About TeamSnap:
TeamSnap is an award-winning mobile and web service for managing recreational and competitive sports teams and groups. With a simple but powerful interface, TeamSnap makes it easy to keep track of Rosters, Schedules, Game and Practice Attendance and Availability, Team Payments, Statistics and much more. Comprehensive messaging functions keep everyone in touch, and with a strong focus on usability and simplicity, TeamSnap is software that people actually find fun to use.

With enthusiastic customers in 135 countries, and teams representing over 100 different sports as well as non-sport groups, TeamSnap has quickly become the fastest-growing team and group management solution on the planet. Lear more at: http://www.teamsnap.com/ .

News Source: TeamSnap, Inc. :: This press release was issued on behalf of the news source by Send2Press® Newswire, a service of Neotrope®. View all current news at the Send2Press for Journalists Portal: http://Send2PressNewswire.com/ .