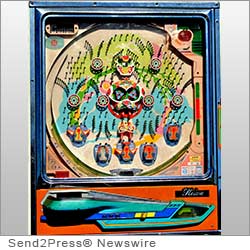 ALAMEDA, Calif., Aug. 1, 2012 (SEND2PRESS NEWSWIRE) — The Pacific Pinball Museum (PPM) proudly announces the opening of “Bagatelle, Pachinko, and Peggle,” an exhibition of early pins-in-a-board games, and the digital extension of these games, Peggle.

“The Pacific Pinball Museum is proud to encourage more pinball artists to express themselves and share their discoveries with the public,” said PPM founder and executive director Michael Schiess. “The art and exhibits on our walls are designed to help visitors interpret the history, science and art of pinball.”

WHAT: An exhibit of rare bagatelles and pachinko machines, with an opportunity to play Peggle, a digital bagatelle.
More Info: info@pacificpinball.org, 510-205-6959.

About Bagatelle, Pachinko and Peggle:
Bagatelles were the earliest form of pinball. Bagatelles were created by the French in the 1700s, and came to the United States when French soldiers fought alongside Americans against the British rule. Bagatelle games took many forms. Most used small nails or “pins” to deflect the balls into or around holes in the slanted board. Some had legs and looked like pieces of furniture. Others had arrays of holes at one end, and a cue type stick was used to shoot balls into the holes. Ironically, nearly a century later, a British ex-pat, Montague Redgrave secured the first patent for a spring loaded plunger creating the first American pinball.

Pachinko machines were first built during the 1920s, modeled after an American form of vertical bagatelle. Pachinko designers use colorful and eye-catching designs, cartoons, animals, and flowering plants as themes. Balls are launched with a flipper-like device which is the only control mechanism that the player can regulate. Most pachinko players shoot the balls as fast as possible, relying on luck to guide the balls into winning holes. All of Japan’s pachinko parlors were closed down during World War II but re-emerged in the late 1940s, and are still very popular.

Since its first introduction in March 2007, the Peggle series of digital games has been downloaded more than 45 million times on the Web, and garnered more than a dozen awards from leading industry associations and trade journals. Combining elements of pinball and pachinko, Peggle players fire a metallic silver ball from the top of the screen, relying on gravity to propel the ball downwards while it ricochets off unique arrangements of orange and blue pegs. The goal is to clear all the orange pegs from the screen, while earning as many points as possible, before running out of balls. Power-ups include explosive area-clearing blasts, lobster claws that serve as pinball-like flippers and “fireballs” that cut through all pegs in their path.

“This is just one of several exhibits the PPM can make available to institutions and galleries to exhibit for a fee. Each show can feature beautiful pinball art alongside working exhibits and playable pinball machines,” Curator Melissa Harmon said. “This exhibit shows us the interplay of the modern day digital game Peggle with Bagatelle, a game from the 1800s, which I think is just astounding.”

News Source: Pacific Pinball Museum :: This press release was issued on behalf of the news source by Send2Press® Newswire, a service of Neotrope®. View all current news at the Send2Press for Journalists Portal: http://Send2PressNewswire.com/ .