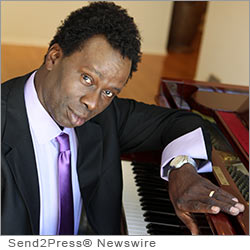 LOS ANGELES, Calif., Aug. 2, 2012 (SEND2PRESS NEWSWIRE) — Keyboard wizard Kevin Toney is about to kick the temperature up in August several more degrees with a series of exciting “California Concerts.” With the July 24 release of his classical jazz concept album “New American Suite” by his new trio, The Kevin Toney 3, the acclaimed pianist will be showcased at The Ultimate Jazz Festival in Ontario, Calif. on August 5, followed at the end of the month by the official CD launch party/concert at Vitello’s in Studio City.

With compositions such as “Spacious Skies,” “E Pluribus Unum” and a dynamic new arrangement of Scott Joplin’s “The Entertainer,” Toney’s “New American Suite” is a richly inspired salute to the new forward thinking spirit of America that blends traditional acoustic jazz trio music with the compositional expanse of classical movements. The Kevin Toney 3 features Michael Bradford on bass and Chris Coleman on drums.

“These performances represent the new (KT3) and the vintage (Blackbyrds) and is the culmination of my journey in music!” says Kevin Toney.

Kevin Toney first came to prominence as a founding member of the pioneering `70s soul-jazz band The Blackbyrds, a group assembled under jazz legend and educator Dr. Donald Byrd that enjoyed major hits that include the Grammy(R)-nominated “Walking in Rhythm,” “Rock Creek Park” and “Soft and Easy.” Toney has reassembled saxophonist Allan Barnes and guitarist Orville Saunders and fleshed them out with others including daughter Dominique Toney on lead vocals and second keyboards.

The Blackbyrds will be sharing the opening night of the Long Beach Jazz Festival with The Isley Brothers on Friday August 10, followed by a Saturday/Sunday stand at Yoshi’s in Oakland on August 11-12, and an encore engagement at Morongo Casino (near Palm Springs) on Friday, August 17.

News Source: Kevin Toney :: This press release was issued on behalf of the news source by Send2Press® Newswire, a service of Neotrope®. View all current news at the Send2Press for Journalists Portal: http://Send2PressNewswire.com/ .