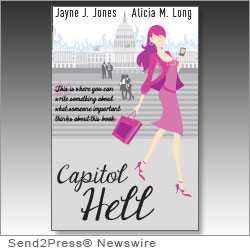 MINNEAPOLIS, Minn., Aug. 6, 2012 (SEND2PRESS NEWSWIRE) — Minnesota native Jayne Jones and University of Minnesota graduate Alicia Long cut their political teeth as idealistic young staffers on Capitol Hill working for Senator Norm Coleman. That eye-opening behind-the-scenes experience has lead them to write “Capitol Hell” (ISBN: 978-1-59298-536-4), a saucy novel about the crazy co-workers, high maintenance politicians, and over-the-top entourages that can only be found inside the beltway.

“Our time on the Hill coupled with countless other hilarious stories from congressional offices and staffers gave us an endless supply of crazy to write about,” said Jayne. “You find yourself and your friends in the midst of one unbelievable situation after another, a truly unreal reality.” “We know people are going to need a few laughs to make it through this Presidential election,” adds Alicia, “what better cure for the vitriolic mudslinging of campaign season than to escape into our uproarious little novel about what is likely happening behind closed doors.”

Jayne and Alicia met while working on the Coleman for Senate campaign and became fast friends after working for Senator Coleman in both his Saint Paul, MN and Washington, D.C. offices. They survived their time on the Hill by sharing the insanity of their D.C. experiences with other Capitol Hill staffers, who shared similar stories, and have now woven those “real-life” misadventures into the story of Allison Amundson and Janet Johannson. This off-beat and hilarious novel lets readers see behind the political person and into the life of fictional Senator Anders McDermott III, a rising star in the U.S. Senate from Minnesota who has his eye on the White House.

In the book, the second Allison sets foot in the prestigious Senate Russell Building, things begin to go awry. Her co-workers include a Chief of Staff who has no control in the office, a pompous primping and preening Press Secretary, and worst of all, the Senator himself who cares more about his rise fame than the people of Minnesota and who brings along the baggage of his kooky family. As Allison struggles to juggle her new career, a growing love interest and her declining bank account; she is comforted only by Janet, a fireplug who spends her time online dating and stalking a Senator of her own. Just as they begin to figure out how to survive, Allison and Janet’s lives are turned upside down when Senator McDermott announces his bid for President of United States and they find themselves at the center of one of the craziest campaigns in history. From a disastrous campaign tour across Minnesota with the Senator’s demanding and irrational family, to late night scrambles upgrading the campaign’s ugly fishing shack booth in time for the State Fair, these girls slog from one hilarious and eye-opening assignment to another.

NEWS SOURCE: Jayne Jones and Alicia Long :: This press release was issued on behalf of the news source by Send2Press(R) Newswire, a service of Neotrope(R). View all current news at the Send2Press for Journalists Portal: http://Send2PressNewswire.com/ .