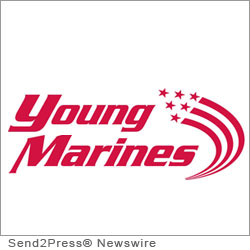 WASHINGTON, D.C., Aug. 9, 2012 (SEND2PRESS NEWSWIRE) — Over 175 youth members of the Young Marines from throughout the country will be attending the 30th anniversary of the National Navajo Code Talker Day in Window Rock, Arizona on August 14.

The Navajo Code Talkers were given much credit for the success of WWII in the Pacific but sadly, they received no accolades until years later when President Ronald Reagan declared August 14, 1982 “National Navajo Code Talker Day.” The year 2012 marks the 30th Anniversary of that special day and Young Marines will be in Window Rock, Arizona to honor these amazing veterans and are also assisting in ceremony preparations.

Volunteer-in-charge of the Young Marines efforts with National Navajo Code Talker Day, Brenda McNulty of Colorado, says this event is not only a veteran’s appreciation experience but also a learning opportunity for the Young Marines youth membership with an additional emphasis on Native American affairs. “I have personally been escorting hundreds of Young Marines to this event since 2006 and this year is expected to be the largest year considering the 30th anniversary and August 14 has been declared a Navajo Nation Holiday.”

The Young Marines national organization has assisted the Navajo Nation in commemorating ‘their day’ for several years, says Mike Kessler, National Executive Director, Young Marines. “Although lost on many calendars, the Young Marines take special pride in letting the Navajo Code Talkers know that their valued contribution to our victory in the Pacific during World War II is legendary, and we will never allow August 14th to pass without proper respect,” Kessler said, “As long as we as an organization are able to attend and as long as the descendants of the Code Talkers wish to commemorate that day, the Young Marines will be there to do so with them.”

Young Marines youths and adult volunteers have been busy for months with preparations such as obtaining event sponsorships, arranging gift bags for the veterans and their wives, practicing their marching skills and color guard performances for the parade, and keeping in close contact with coordinators of the Navajo Nation.

Young Marines will arrive a day in advance to assist with last minute details to include assisting the Navajo Nation with event arrangements and to help develop youth leadership.

On the day of the event, members of the Young Marines will lead the event attendees in the Pledge of Allegiance, the National Anthem, and march in the parade to honor the veterans of World War II. Young Marines youth members will also volunteer for numerous duties, such as serving as escorts to the estimated 25 Navajo Code Talkers, ensuring those in attendance have sufficient amounts of water, and placing a wreath at the memorial as part of the overall veterans appreciation event.

About the Young Marines:
The Young Marines is a national non-profit 501(c)3 youth education and service program for boys and girls ages 8 through completion of high school. The program focuses on teaching the values of leadership, teamwork and self-discipline so its members can live and promote a healthy, drug-free lifestyle. The national organization is comprised of over 10,000 youths and 2,800 adult volunteers in nearly 300 units across the United States. The Young Marines official website: http://www.YoungMarines.com/ .

About the Navajo Code Talkers:
Known as Navajo Code Talkers, they were young Navajo men who transmitted secret communications on the battlefields of WWII. At a time when America’s best cryptographers were falling short, these modest sheepherders and farmers were able to fashion the most ingenious and successful code in military history. They drew upon their proud warrior tradition to brave the dense jungles of Guadalcanal and the exposed beachheads of Iwo Jima. Serving with distinction in every major engagement of the Pacific theater from 1942-1945, their unbreakable code played a pivotal role in saving countless lives and hastening the war’s end. The official website: http://www.navajocodetalkers.org/ .

NEWS SOURCE: Young Marines :: This press release was issued on behalf of the news source by Send2Press(R) Newswire, a service of Neotrope(R). View all current news at the Send2Press for Journalists Portal: http://Send2PressNewswire.com/ .