You are here: Home › Columbia-Trained Therapist and Author Introduces Handwriting Analysis as a Clinical Tool
By Send2Press Newswire on August 13, 2012 in Books and Publishing, Education, Medical, Press Releases, Toronto, Ontario 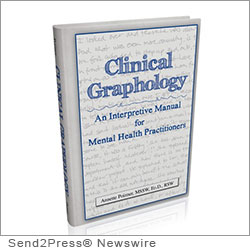 Determined to educate therapists and counselors about the way graphology can inform clinical practice, Poizner has presented academically, lecturing at universities and presenting at conferences such as that of the Canadian Psychological Association. She has also published in academic journals and, with a blog on the Huffington Post, routinely writes in the popular press.

Now, her new book, “Clinical Graphology: An Interpretive Manual for Mental Health Practitioners” (hardcover; $47.95, June 2012), is the first of its kind to target a clinical audience, bearing the stamp of Charles C Thomas Publisher, a scholarly publishing house that produces materials for mainstream mental health professionals.

Poizner reflects, “Each individual is fundamentally expressive, having a preferred way of moving, a preferred rhythm and style. Those preferences are expressed through gesture, mannerisms, and facial expressions … also in handwriting.” Since handwriting leaves a written trace which can be reviewed at leisure, Poizner asserts that handwriting can be usefully analyzed.

She notes that graphology should not be used in isolation, but always in tandem with other assessment measures. “In my experience, graphology can help identify personality style and even point to the hidden root causes of tenacious problems that have not responded to conventional therapy. Yet, handwriting is potentially affected by drug use, health difficulties, even writing conditions. As a tool, it has its limits.”

Despite those limits, she asserts graphology still has value to psychotherapists. “If handwriting analysis helps therapists quickly generate tentative ideas about clients and if the process of using it is potentially rich and even intriguing, then my thought is we should use it.” She adds, “and we can be discerning about how and when to use it, and towards what end.”

In clinical practice for almost 20 years, Poizner routinely collects handwriting samples and administers other projective tests when doing psychotherapy. To date, her work, representing an innovation in mental health care, has been featured in dailies across Canada and in Reader’s Digest.

NEWS SOURCE: Annette Poizner :: This press release was issued on behalf of the news source by Send2Press(R) Newswire, a service of Neotrope(R). View all current news at the Send2Press for Journalists Portal: http://Send2PressNewswire.com/ .