You are here: Home › VirtualHayastan.com is launching their website with a Candlelight Vigil
By Send2Press Newswire on August 14, 2012 in California, Directories and Portals, Events, General Editorial, LOS ANGELES, Calif., Press Releases 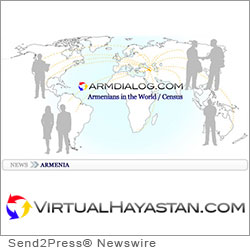 LOS ANGELES, Calif., Aug. 14, 2012 (SEND2PRESS NEWSWIRE) — When the idea of creating VirtualHayastan.com was born to Grigor Manoyan, he immediately started working on creating something extraordinary for the Armenians all over the world.

Mr. Manoyan served as the head of the software engineering branch of the Nuclear Power Plant Software Emulation Program for the entire USSR and other socialist based countries. He made it possible to create a virtual atomic power plant in the days of the Soviet Union and now, Grigor Manoyan creates VirtualHayastan.com.

“I was the chief programmer in charge of leading computer programming departments to create emulation software with the same specifications and properties as the real Atomic Power Plant,” says Grigor Manoyan, “and using this virtual software, the technicians were able to conduct tests in emulation mode to simulate real life scenarios and collect data for analysis. Today, I am proudly announcing the birth of Virtual Hayastan (Virtual Armenia) in order to unite each Armenian and give every one of them the opportunity to voice their opinions, regardless of their geographic location.”

When asked, What is VirtualHayastan.com and why was it created? Mr. Manoyan said: “In 2009 I had an idea to create an online census system of all Armenians around the globe. I spent many sleepless nights, thinking about what the website functionality and structure should be. And so my ideas grew from a census portal to a virtual environment that allows all Armenians to socialize, freely express their opinions, create their own surveys, write their own articles, write their own open letters and share information with each other. Furthermore, in order to preserve order, quality, and equality, I came up with an organizational system that would simulate a government with its own governing bodies.

“Think about it: there are over 2 million Armenians living in Russia, about 1 million in the United States and several million spread out in the other countries. However, their voices are lost, their opinions are not heard, and their intentions are not executed. I have not seen any website or other source of media that enables all Armenians to express their opinions as a whole nation, in one place, regardless of where they live in the world,” continued Mr. Manoyan.

In short, Virtual Hayastan has the properties and functionalities of a real country in an internet infrastructure uniting all Armenians under one roof and giving them the opportunity to express their opinions and discuss topics related to its culture, politics, education, and any other issues.

“I have heard from many, and strongly believe it myself, that the future of the Armenians lies in their unity and VirtualHayastan.com was created for that purpose and to achieve this unity,” said Mr. Manoyan.

He concluded by saying: “I would like to thank all of our Virtual Hayastan staff and contributors with all my heart, since it would not have been possible to complete this phase of our project without them. This project is not a one man’s job and the future phase of the infrastructure development will largely depend on the growing number of participants.”

Virtual Hayastan may be accessed by going to http://www.virtualhayastan.com web address. The website launch is also dedicated to Vahe Avetyan, who tragically passed away recently due to the violent incident at Harsnakar Complex in Yerevan, Armenia. Virtual Hayastan staff was deeply moved by Vahe’s story and decided to carry a virtual candlelight vigil in his memory. Any Virtual Hayastan visitor may light a candle in his memory and express their opinions regarding the tragedy.

NEWS SOURCE: Virtual Hayastan :: This press release was issued on behalf of the news source by Send2Press(R) Newswire, a service of Neotrope(R). View all current news at the Send2Press for Journalists Portal: http://Send2PressNewswire.com/ .