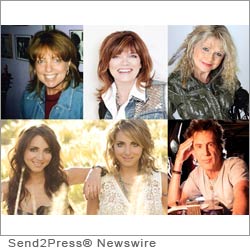 NASHVILLE, Tenn. (SEND2PRESS NEWSWIRE) — Attracting Nashville’s finest songwriters, the Douglas Corner Cafe is a legendary site for great performances in country music. “It’s always an honor playing Douglas Corner Cafe,” states Jane Bach, who will be leading a writer’s round in the famous venue on August 24.

“So many great singer/songwriters have played here,” says Sandra Piller (NMW #1 Female Country Vocalist 2010), the Los Angeles-based singer who is looking forward to playing in the Friday night Round. The Douglas Corner Cafe has presented such stars as Alan Jackson, Trisha Yearwood, The Kentucky Headhunters, Mark Collie, Jewel, Billy Dean, John Berry, Blake Shelton, Garth Brooks, and many others.

A frequent performer at songwriter’s rounds in cities from coast to coast, Bach is a Grammy nominated, multiple-award-winning writer of hit recordings by Reba McEntire, Ray Price, Jo Dee Messina, Tammy Wynette, Collin Raye, and many others. Bach’s “The Last One to Know” is still one of Reba McEntire’s biggest selling singles.

On stage with Bach and Piller in the 6-8pm show will be Becky Hobbs and Nik & Sam. Called “The Beckaroo” by friends, Hobbs is a compelling performer whose songs have been recorded by Alabama (“Angels Among Us”), Conway Twitty (“I Want To Know You Before We Make Love” went to #1), George Jones, Loretta Lynn, Emmylou Harris, Glen Campbell, Wanda Jackson, John Anderson, Janie Fricke, Lacy J Dalton, Moe Bandy, Shelly West, Helen Reddy, Shirley Bassey, Jane Oliver, and others. Nik & Sam are two young singer-songwriters who have moved to Nashville to pursue their musical dreams, and from their great harmonies and terrific guitar-and-banjo playing, they’re on their way! Award-winning musician Duane Sciaqua (Paul McCartney, Glenn Frey, Rodney Atkins) will accompany Sandra Piller on guitar.

Often collaborating on songs with major and indie recording artists, and producer of Piller’s recent EP, “Love Goes On,” and album, “Days Like These,” Bach is an outspoken supporter of the writer’s round format. “This is such a great way for people to hear songs sung by the songwriter,” she states, “and you get the chance to hear amazing songs that you’ll never hear on radio. It’s always an inspiring experience for the writers and the audience.”

In the classic format of a round, each songwriter plays one their songs, followed by the next writer, and the next, and so on. They can join in with each other, add harmonies, contribute a guitar riff, perform a little percussion, or just listen along with the audience.

For more information about this event, to receive a promo copy of the “Love Goes On” EP, the “Days Like These” CD, or to schedule an interview with Sandra Piller and Jane Bach, please visit www.pillersoundsmusic.com or contact John Scott G of G-Man Marketing.