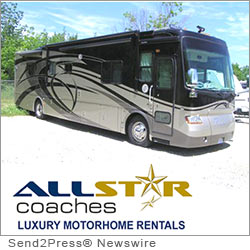 FORT LAUDERDALE, Fla., Aug. 29, 2012 (SEND2PRESS NEWSWIRE) — Allstar Coaches, the national RV rental dealer based in Florida, has announced today that it stands ready to assist in the wake of Hurricane Isaac. Allstar provided more than 30 RV rentals to government agencies, the Red Cross and various utility and insurance companies following Hurricane Katrina. “As a Florida based company we profoundly understand what is needed after a storm and we’ll do what we can to help,” says Rob Tischler CEO of Allstar.

Tropical Storm Isaac, once a category 1 hurricane made its landfall yesterday in Southern Louisiana at 6:45 p.m. local time and has been ravaging New Orleans and the Gulf Coast region for more than 24 hours with flooding rains, wind gusts exceeding 100 miles per hour and potentially deadly tidal surges. Isaac is expected to continue wreaking havoc and remain over the area until late Thursday or early Friday. The storm has caused massive power outages, and appears to have caused widespread catastrophic damage, never before seen from a category 1 hurricane.

FEMA, The American Red Cross and various insurance carriers themselves used the motorhome rental units in a variety of missions following Katrina and are expected to do the same after Isaac passes. These units are self-contained with internal generators and large fuel tanks designed to allow long term use in areas where power might not be available. These RV’s can be used as mobile command and control centers, as a base for rescue and repair operations and as temporary housing for both out of town personnel brought in to deal with this catastrophe as well as those displaced by the storm.

According to Tischler, “Government agencies, utility and insurance providers will be given top priority; and additional units will be made ready for individuals as they become available.” Tischler advises that displaced residents should check with their insurance carriers to see if the cost of temporary housing is covered by their policies, indicating that most insurance companies will indeed cover these costs if it becomes necessary.

Von Isanogle, Allstar’s Fleet Operations Director, says “all of our locations have implemented their emergency action plans and are standing by, ready to begin moving vehicles to the Gulf Coast as soon as it becomes safe to do so.”

Allstar (www.allstarcoaches.com) operates a fleet of luxury motorhome rentals which are available for delivery nationwide from their strategically located offices in nine states.

For further information please contact the Emergency Operations Desk at Allstar Coaches (866) 838-4465 or send an inquiry to info@allstarcoaches.com.

NEWS SOURCE: Allstar Coaches :: This press release was issued on behalf of the news source by Send2Press(R) Newswire, a service of Neotrope(R). View all current news at the Send2Press for Journalists Portal: http://Send2PressNewswire.com/ .