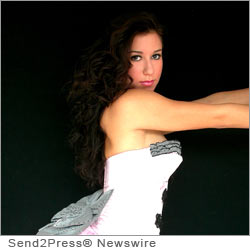 HOLLYWOOD, Calif. (SEND2PRESS NEWSWIRE) — Dance floors fill up when “Breakdown” is played, so now a new artist is being welcomed to the club scene. Her name is Cristelle and her recording, dancing and modeling careers are moving forward at 180BPM. Okay, that’s “beats per minute” for those not in the EDM scene. (Okay, that’s Electronic Dance Music.)

“With her ‘Breakdown’ single, Cristelle is immediately seen as an artist who appeals to people who want to surrender their bodies to a great dance beat and hypnotic vocals,” notes her producer, Peter Roberts.

“In this song, as in a lot of the songs we’re currently recording, you can feel what it’s like to live life to the fullest,” says Cristelle, the 23-year-old artist. “Another aspect of this song is that it proves dreams can come true, that you can go out and live your dream,” she adds.

The “Breakdown” single celebrates the feeling of youth, love, exuberance, excitement, and good times. DJs are being serviced with the song, as are remixers, music supervisors, and music editors.

Cristelle began performing about the time she learned to walk. “Fortunately, my family was musical and artistic,” she states, “so I was always surrounded by singers, actors, and artists. In fact, during the sixties, my mom sang with a girl group in Liverpool, England.” She was able to win a spot in Los Angeles High School for the Performing Arts and spent one season with Disney On Ice performing in “High School Musical.”

A music video for “Breakdown” is now on YouTube and the single is available for sale on iTunes and Amazon. Her first album, “Rush,” will be released later this year by BDM Records. As with the single, the producer is Peter Roberts, who has had more than 250 of his songs recorded by artists in almost every genre. He is a multiple award winning songwriter/producer and 5-time Grammy Award nominee.

Multi-talented and multi-faceted, Cristelle is a spirited new voice for several generations of music lovers. Visit her website at http://www.cristellemusic.com for more information on Cristelle, her music, and links to her social network pages.