You are here: Home › Historic Hotel Durant in Bay Area to Be Sold
By Send2Press Newswire on September 5, 2012 in Business, California, Hospitality, Press Releases, Real Estate 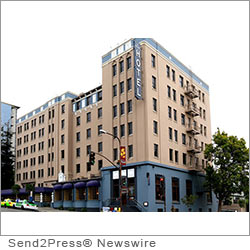 BERKELEY, Calif., Sept. 5, 2012 (SEND2PRESS NEWSWIRE) — HVS Capital Corp (www.hvscapital.com) has been exclusively appointed to sell the Hotel Durant in Berkeley, Calif. The 143-room property is a historic, contemporary, boutique hotel adjacent the University of California at Berkeley, within walking distance of all student housing, the newly renovated football stadium and the basketball arena.

In 1924, the Berkeley Hotel Corporation was formed and hired the firm of William Weeks, one of the most prolific and versatile architects of his generation, to design the hotel. The property’s namesake, Henry Durant, was the first President of the University of California at Berkeley and a former mayor of Oakland. The Hotel Durant opened in 1928 with a gala celebration, music, refreshments and tours throughout this new hostelry.

The Hotel Durant embarked on a comprehensive $7 million renovation in 2007. Subsequently, the property was once again unveiled to the local community, this time showcasing Berkeley’s first green-certified boutique hotel, with touches of the city’s whimsical, bohemian spirit, in a more collegiate-themed setting. Henry’s Publick House, one of the most well-known local bars, was reintroduced as Berkeley’s first modern gastro pub and restaurant.

“There is a limited amount of lodging supply in Berkeley, high barriers-to-entry, and no hotel is closer to the University than the Hotel Durant,” said Bill Sipple, Managing Director of HVS Capital Corp. “The Hotel Durant and its competitive set have experienced double digit RevPAR growth for the last 33 months. With the $321 million renovation of California Memorial Stadium now complete, East Bay hotels should continue to thrive.”

The University of California’s first campus opened in 1868 at Berkeley. Currently, there is an enrollment of approximately 25,000 undergraduates and an additional 10,000 graduate students. The entire campus spans 1,232 acres, although its core encompasses 178 acres. Surrounding this core is the most densely populated area of the city and home to the Hotel Durant.

NEWS SOURCE: HVS Capital Corp :: This press release was issued on behalf of the news source by Send2Press(R) Newswire, a service of Neotrope(R). View all current news at the Send2Press for Journalists Portal: http://Send2PressNewswire.com/ .