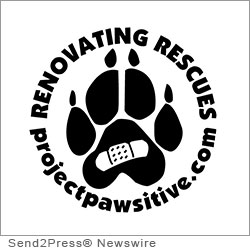 “With donations dwindling and pet surrenders increasing, numerous animal rescues and shelters across the country don’t have the funds to even think about fixing their buildings,” said Jill Sullivan Grueter, Founder and Team Leader of The Project Pawsitive Foundation, who left her career to start the organization after the death of her 55-year-old father and 2-year-old rescue dog changed her outlook on life. “It’s not easy to do what we’re doing. It’s renovation to renovation, but just when we think we won’t have the funds to renovate another shelter or rescue, it works out.”

From New England to Tennessee, the Project Pawsitive Team is now making their mark at the Salem Animal Rescue League (www.sarl-nh.org) in Salem, N.H. on September 14, 15, and 16. With the help of their premier sponsor for this renovation, Pet Life Stores (www.petlifestores.com) and personal donations from animal lovers, the team will focus on installing new vinyl flooring, framing a quarantine area for dogs rescued from the south, fixing air circulation issues, installing a fenced in meet-and-greet area, and fixing broken windows.

Founded in 2009, the team of four friends from New Hampshire head to animal rescues and shelters in desperate need providing them with their version of Extreme Home Makeover renovations. There have even been times when the renovations they provide prevent these animal organizations from having to close their doors permanently.

“Speaking for The Board of Directors, Staff and all our wonderful volunteers at SARL, we are honored to have been selected by the Project Pawsitive Team and very thankful to Pet Life for supporting this endeavor,” said Patricia Mack Manager of Development & Media Relations at the Salem Animal Rescue League. “We can’t wait to get started on the renovations. Close to 1,000 animals a year pass through our doors so you can imagine the wear and tear that takes place. Project Pawsitive and Pet Life, what a wonderful team, our cats and dogs are lucky to be the beneficiaries of this collaboration.”

The Project Pawsitive Team continues to raise funds for their next renovation in Salem, N.H. Their sponsor, Pet Life (www.petlifestores.com) and its vendors are matching donations and all donors are entered to win a one-year supply of high-quality pet food from Pet Life. To donate $10 toward the renovation, go to http://fundly.com/help-project-pawsitive-and-pet-life-renovate-animal-shelters-in-great-need .

“Pet Life is proud to sponsor The Project Pawsitive Foundation and help them renovate animal rescues and shelters in need,” said Pete Risano, President of Pet Life Stores. “The Salem Animal Rescue League is a fantastic organization and we are thrilled to be part of the weekend-long renovation at their site on September 14, 15, and 16.”

The Project Pawsitive team films their renovations and shares them with their 11,500 fans on Facebook (www.facebook.com/projectpawsitive), web site (www.projectpawsitive.com), and YouTube channel (http://www.youtube.com/user/MissionPawsibleShow).

“We love filming what we do because it helps people see how much these renovations are needed and the importance of adoption and spaying and neutering pets,” said Sullivan Grueter. “Plus, we’re having a blast. It’s truly a gift to help these amazing rescues.”

About the Salem Animal Rescue League:

The Salem Animal rescue League (SARL) was formed in 1992 with the goal of rescuing 50 stray and unwanted animals in the Salem, N.H. area. During that year SARL rescued a total of 157 animals, affirming the need for an alternative to traditional municipal animal control. Today, the Salem Animal Rescue League rescues and adopts over 800 dogs and cats per year. In 1993, SARL was instrumental in changing N.H. Legislation to make animal abuse a felony. More information: www.sarl-nh.org.

NEWS SOURCE: The Project Pawsitive Foundation :: This press release was issued on behalf of the news source by Send2Press(R) Newswire, a service of Neotrope(R). View all current news at the Send2Press for Journalists Portal: http://Send2PressNewswire.com/ .