You are here: Home › Free iPhone and iPad App Reinvents How We Use the Dictionary!
By Send2Press Newswire on September 6, 2012 in Apple, Mac, iPod and iPhone, CHICAGO, Ill., Computing, Entertainment, Illinois, Press Releases, Videos 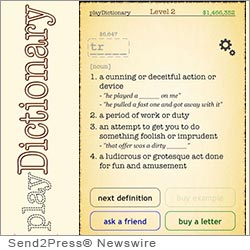 CHICAGO, Ill., Sept. 6, 2012 (SEND2PRESS NEWSWIRE) — BiBa Soft, a small app development company, has reinvented how we use the dictionary by turning it into a fun interactive word game. Play Dictionary shows a definition of a word from the dictionary then asks you to figure that word out using the least amount of definitions.

“We wanted to create a unique new word game that was more than just building a word from another or unscrambling a few tiles to spell a word. Play Dictionary allows people to use the dictionary like never before to expand their vocabulary while having fun playing a word game,” says Larry Brunken, co-creator of the game. “We need more interactive educational game apps that encourage people to learn and play together.”

The game shows you how many letters are in the word and if it is a noun or an adjective, you can also use the word in a sentence. Choose to buy a letter and it will show letters in the word as a clue. You can also use the “ask a friend” feature to send a message of the definition during the game to a friend so they can answer in real-time to play along. The game has more than nine addictive levels depending on the size of the word, creating a challenge for even the most literate English professor.

One app user posted, “I play every day with my three daughters and they are getting higher scores then I do.”

Mr. Brunken states, “Our goal is to create educational interactive games that engage people of all ages to use technology for fun while learning.”

The game is free and available in the iTunes store for iPhone, iPad, iPod; there is also an expanded game version with many extra features for only $2.99 (educational discount is available). A Facebook and HTML5 browser version is being developed for release later this fall.

About BiBa Soft:
A Canadian company formed in 2007 by Catalin Stan, BiBa Soft has released several successful apps to date. In 2012 BiBa Soft launched a partnership with U.S. based marketer Larry Brunken to co-create and market a series of educational game apps for iOS and beyond.

NEWS SOURCE: BiBa Soft :: This press release was issued on behalf of the news source by Send2Press(R) Newswire, a service of Neotrope(R). View all current news at the Send2Press for Journalists Portal: http://Send2PressNewswire.com/ .