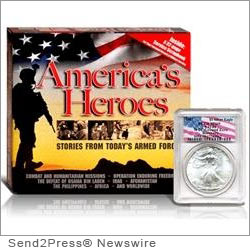 “This is an amazing opportunity for any coin collector or precious metals investor to own a piece of American History,” said John Hutmacher, President of U.S. Gold Bureau. “They are extremely affordable and can be a great investment. Rarely do we have coins with so much historical and emotional symbolism.”

The coins have all been certified as authentic and are now available to the general public and private investors alike. Offered at $319, every coin purchased will come with a copy of “America’s Heroes: Stories from Today’s Armed Forces” and a portion of proceeds will be donated to the WTC National Memorial and Museum. Interested collectors can purchase through the U.S. Gold Bureau’s public store at www.usgoldbureau.com/store or by calling (512) 623-7797.

NEWS SOURCE: United States Gold Bureau :: This press release was issued on behalf of the news source by Send2Press(R) Newswire, a service of Neotrope(R). View all current news at the Send2Press for Journalists Portal: http://Send2PressNewswire.com/ .