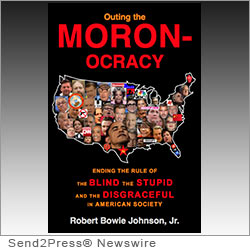 ANNAPOLIS, Md., Sept. 12, 2012 (SEND2PRESS NEWSWIRE) — Solving Light Books today announced that it has published thirty specific examples of scientific incompetence on the part of the National Academy of Sciences (NAS). The thirty examples appear as an appendix to the book, “Outing the Moronocracy: Ending the Rule of the Blind, the Stupid, and the Disgraceful in American Society” (ISBN: 978-0-9705438-8-2) by Robert Bowie Johnson, Jr.

All of the examples of NAS scientific incompetence are taken from “Science, Evolution, and Creationism,” the NAS booklet currently in use by its hierarchy to promote-in the minds of America’s science teachers, school boards, and children-its atheist and materialist doctrine of chance human reptile descent.

According to Johnson, the examples of NAS incompetence include circular reasoning, illogical deductions, ad hominem attacks on those who disagree, arbitrary transmutation of arrant speculation into “fact,” repetitive false affirmations, turning the proven scientific method on its head, insisting that the notion of chance human reptile descent is above criticism-even sacrosanct, confusing the interpretation of evidence with the evidence itself, reliance upon the opinions of apostate religious leaders to justify its “science,” Platonic sophistry, and the presentation of a new bogus “missing link,” adding to the long, bogus list thereof. All thirty examples of NAS scientific incompetence may be found at www.themoronocracy.com.

The thirty examples of NAS scientific incompetence appear as part of an open letter from Mr. Johnson to Ralph J. Cicerone, the President of the NAS, over whose signature the NAS booklet was published. Mr. Johnson calls upon Mr. Cicerone to resign, writing, “Your attempt to validate your atheism through your insistence upon chance human reptile descent fails every test of truth and logic. I can think of nothing more disgraceful than your attempting to poison the minds of our school children with such empty atheistic seduction masquerading as science.”

Mr. Johnson, who holds a general science degree from West Point, details what he calls the Dark Age, a priori pseudo-science employed by the NAS in a chapter entitled “The National Academy of Sciences: A Hierarchy of Morons.” According to Johnson, the chapter reveals that the NAS hierarchy is concerned first and foremost with attempting to validate its atheism, and not with seeking the objective truth in nature. In that chapter, Mr. Johnson also points out that Al Gore, in a February 27th, 2010 New York Times editorial, revealed that he relies upon the NAS for all of his “facts” on so-called global warming, the sister pseudo-science of chance human reptile descent.

According to Johnson, the NAS is one of the six pillars of a Moronocracy now ruling America. He identifies the other five pillars as Oprah Winfrey (representing Hollywood and the popular culture), Academia, Apostate Christendom, the Malleable Marxist Media, and the Obama Regime. These five pillars have all turned their backs on our Creator, Mr. Johnson says, and thus they require an alternate explanation for our origins. “What the NAS supplies as the alternative, as A. N. Field has pointed out, is the most debased view of human origins the mind of man is capable of conceiving,” Mr. Johnson says.

“The NAS’s theory of chance human reptile descent is manifestly fraudulent based upon the time-tested principles of valid science-principles that the NAS hierarchy cavalierly ignores,” Mr. Johnson added.

All of Chapter One of “Outing the Moronocracy” may be read at http://www.themoronocracy.com/ – along with excerpts from the other chapters, and the NAS appendix in its entirety.

NEWS SOURCE: Solving Light Books :: This press release was issued on behalf of the news source by Send2Press(R) Newswire, a service of Neotrope(R). View all current news at the Send2Press for Journalists Portal: http://Send2PressNewswire.com/ .