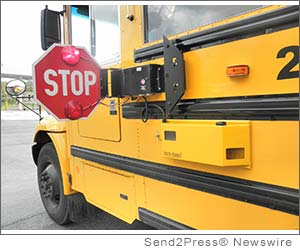 Zen-tinel stop-arm cameras installed on the outside of buses automatically record any vehicle passing the bus while the stop-arm is extended without having to rely on driver activation.

Up to three cameras capture images of front and back license plates, as well as the face of the driver. These images can be turned over to law enforcement and used to prosecute drivers who illegally pass stopped school buses.

In fact, newly installed Zen-tinel stop-arm cameras have caught three drivers who violated Pennsylvania school bus stop sign laws in the first week of implementation in the Altoona Area School District. Pennsylvania law requires all vehicles to stop while a school bus is stopped with red lights flashing and a stop arm extended according to the Pennsylvania Department of Transportation.

Dana Vinglish, operations manager of Altoona Student Transportation, Inc., which handles the transportation for Altoona Area School District stated, “Mounting of the plate that holds the camera is quick and allows the camera to be moved from bus to bus easily. The entire system and mounting plates are school bus yellow so they blend perfectly.”

Vinglish stated that it was an eye-opening experience for one local driver. “The police officer questioned the gentleman who ran the red lights and the driver continuously denied the incident until the officer explained that the police possessed a photograph of the violator’s vehicle as it passed the school bus.”

Portable cameras save school districts money as only about 20 percent of a fleet needs to be outfitted. Problem routes can be targeted by transferring cameras between buses. GPS tracking also is available to map the location of a violation, helping to identify specific areas of need. With stop-arm cameras installed and the help of law enforcement, the danger of illegal school bus passing can be reduced. Zen-tinel’s stop-arm cameras are affordable for any school district.

“Safety should be the top concern of bus operators,” said Larry Vaughn, Zen-tinel president. “Catching motorists who pass stopped school buses is the best way to ensure that level of safety. Our hope is that it will act as a deterrent for other drivers. Awareness of the law is key to stopping violations. Once a driver gets a ticket for passing a school bus, he won’t do it again.”

Zen-tinel, located in Indiana, Pa., has been developing mobile surveillance systems for 10 years and is committed to providing customers with the highest quality products and support services. For information about this product, visit www.zen-tinel.com or call (724) 357-9709.

NEWS SOURCE: Zen-tinel :: This press release was issued on behalf of the news source by Send2Press(R) Newswire, a service of Neotrope(R). View all current news at the Send2Press for Journalists Portal: http://Send2PressNewswire.com/ .