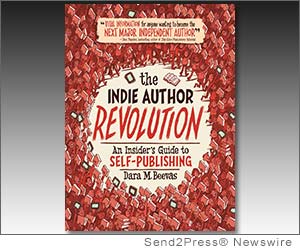 MINNEAPOLIS, Minn., Sept. 24, 2012 (SEND2PRESS NEWSWIRE) — If you’ve got passion, a plan and persistence, you don’t need an agent to become a published author. Indie authors own a significant chunk of the book market, and newcomers can join their ranks with help from indie author mentor Dara Beevas, whose new book, “The Indie Author Revolution: An Insider’s Guide to Self-Publishing” (ISBN 978-1-59298-504-3), hits shelves this month.

A writer, editor, blogger, and speaker, Beevas is vice president of award-winning Beaver’s Pond Press, where she has led hundreds of indie authors through the publishing process. Her passion for the self-publishing movement also led her to launch Wise Ink, an online support community for authors.

Just as indie musicians and filmmakers carved out impressive niches, indie authors are doing the same. An increasing number of well-educated and experienced writers are choosing this route, and the book publishing industry, along with readers, are taking notice.

Beevas believes indie authors will push the publishing industry to evolve. “Legacy publishing isn’t the right answer for every author, and that’s a good thing,” she says. “Indie authors are known for catering to niche audiences overlooked by big publishers. They’re also attracting new readers through the sales of e-books.”

Beevas was inspired to write “The Indie Author Revolution” after witnessing a shift in the types of authors choosing to self-publish. “We’re seeing an astounding number of authors, including those who’ve had book deals, decide that indie publishing is the best way to reach their readers,” Beevas says. “Indie publishing can bring a book to print in under a year, and with services like editing, design, distribution, and e-book conversion, indie authors are producing quality books that do well in the market without having to wait three to five years to get them in the hands of royalty publishers.”

With traditional publishing taking a hit in print sales and fewer unknown authors scoring book deals, it’s not a surprise indie publishing is becoming more common. What is surprising, according to Beevas, is the number of indie books surpassing their traditionally published counterparts-as was seen with the hit romance “Fifty Shades of Grey.”

“E.L. James, Amanda Hocking, Bella Andre, and a host of other successful indie authors are proving that readers care more about good content than about who published it,” Beevas says.

Beevas will be celebrating her new book with a release party at the Twin Cities largest independent bookstore, Magers & Quinn Booksellers, in Minneapolis on Thursday, Sept. 27, 2012, from 6-8 p.m. A native of the Washington, D.C. area, Beevas currently lives in the Twin Cities with her husband Tomme.

NEWS SOURCE: Dara Beevas :: This press release was issued on behalf of the news source by Send2Press(R) Newswire, a service of Neotrope(R). View all current news at the Send2Press for Journalists Portal: http://Send2PressNewswire.com/ .