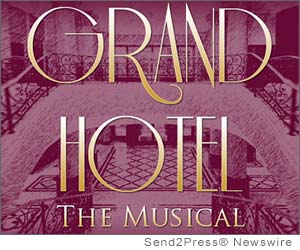 The Blue Hill Troupe produces a musical every fall and a Gilbert & Sullivan operetta every spring, and has donated over $3.5 million to local charities since its inception in 1924. Proceeds from “Grand Hotel” will benefit the GO Project http://www.goprojectnyc.org/.

In 1928 Berlin, the world is between wars and the stock market is booming. The center of the action is the illustrious Grand Hotel, through whose revolving doors pass a cavalcade of desperate, ambitious characters, all yearning for one last, glorious chance at a better future. There’s the fading, but still-beautiful prima ballerina; the charming young Baron, out of money, riding on his looks; the mortally ill bookkeeper, determined to meet society before his grave; the ambitious Hollywood hopeful; the honest, hardworking father-to-be; and the doctor, whose cynical tone foreshadows the looming depression.

The Blue Hill Troupe is proud to partner with the GO Project for its 2012-2013 season, which will culminate in a sumptuous revival of Gilbert & Sullivan’s masterpiece The Mikado, April 12-20, 2013 at El Teatro of El Museo del Barrio.

The GO Project shapes the futures of low-income New York City public school children by providing critical academic, social and emotional support starting in the early elementary years. GO provides year-round educational and family support services to children who are performing below grade level and equips them with the confidence and skills needed to succeed at school, at home and in life.

NEWS SOURCE: Blue Hill Troupe, Ltd. :: This press release was issued on behalf of the news source by Send2Press(R) Newswire, a service of Neotrope(R). View all current news at the Send2Press for Journalists Portal: http://Send2PressNewswire.com/ .