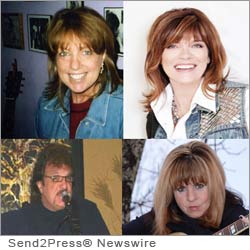 LOS ANGELES, Calif. (SEND2PRESS NEWSWIRE) — Songwriters from California, New York, and Nashville join in a country music tradition at the legendary Bluebird Cafe for “Jane Bach and Friends” on Saturday night, October 6. “This will be a fun evening featuring songs that were hits and some that might soon become hits,” Bach states.

Bach is not only the writer of “The Last One to Know,” a number one hit for Reba McEntire, but also composed hits for Jo Dee Messina, Ray Price, and others. A frequent performer at writer’s rounds in cities from coast to coast, Bach will be the host as well as one of the evening’s singers. “A writer’s round is not only good fun,” says Bach, “it’s also one of the best ways for an audience to get up close and personal with writers and their songs.”

Joining Bach will be Shady Hill Records artist Sandra Piller, who is a big supporter of the writer’s round format. “These evenings are always full of so many good feelings as writers share their work from the past and present,” says Piller, who will be performing numbers from her most recent album, “Days Like These,” as well as from her new 6-song EP, “Love Goes On,” dedicated to her late husband, Michael Piller.

Appearing with Piller and Bach will be Kati Mac and Billy Lee. Mac is the Emmy-nominated NYC singer-songwriter whose song, “Only Love,” was the theme for the daytime drama, “Guiding Light.” “Even if you haven’t heard one of my songs, you’ve heard me singing on numerous commercial jingles,” Mac points out. In addition, she has toured or recorded with Sting, Meat Loaf, and Nona Hendryx. Billy Lee will be singing some of his songs, including “The One,” which became a Top Five hit for Gary Allan.

Nashville audiences are well aware of the classic format of the round, where each songwriter plays one of their songs, followed by the next writer, and the next, and so on. “It results in a good time for all,” Bach notes.

With its rich history of hosting many of Nashville’s finest songwriters, the Bluebird Cafe has become known around the USA and around the world. “Everybody in country music knows about the Bluebird,” states Piller. “Probably everyone in the music business knows, too,” adds Bach.