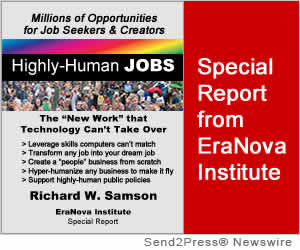 MOUNTAIN LAKES, N.J. (SEND2PRESS NEWSWIRE) — Today EraNova Institute announces an employment report with an upbeat message. Titled, “Highly-Human Jobs, The New Work that Technology Can’t Take Over,” it forecasts the rise of a high-touch, human-centered economy that could dwarf today’s high-tech economy based on smart technology.

Millions of people-oriented, non-programmable jobs may be created now, the report concludes, replacing jobs lost to automation and systemization. And everyone can get into the act.

Written as a practical roadmap for working people as well as entrepreneurs, business leaders, and policy makers, the report offers guidelines for –

* Finding a job that has a future because it’s highly-human and can’t be automated.
* Making any job into your dream job by adding highly-human elements through your own initiative.
* Creating a highly-human job or service from scratch, something useful and fulfilling that can’t be done by smart machines or systems.
* Hiring or developing employees with highly-human skills, to gain competitive advantage.
* Promoting legislation that supports a synergistic balance between technical and human advancement.

Methods and examples are given for honing the seven highly-human skills that set people apart from electronics and systems. The report also describes the budding “highly-human economy,” set to overtake the present service and knowledge-work economy, which earlier overtook the manufacturing economy, which in turn superseded the agricultural economy.

According to Richard W. Samson, author of the report, the coming highly-human economy will feature mental, emotional, social and other non-programmable forms of conscious aliveness that highly automated and even artificially intelligence systems can’t match.

“The great thing is that we don’t have to wait for anybody to create these jobs for us,” says Samson. “Anyone can create them right now on their own — although business leaders, the next President and Congress can help.”

Selling for $7.95, the report may be downloaded, in PDF format, from EraNova’s Highly-Human Jobs website, http://highlyhumanjobs.ning.com. Complimentary copies may be requested by journalists, bloggers, and broadcasters.

The Highly-Human Jobs site is a meeting place for pioneers of the highly-human economy, that could dwarf today’s high-tech economy. Launched today, the site is a service of EraNova Institute — http://www.eranova.com.